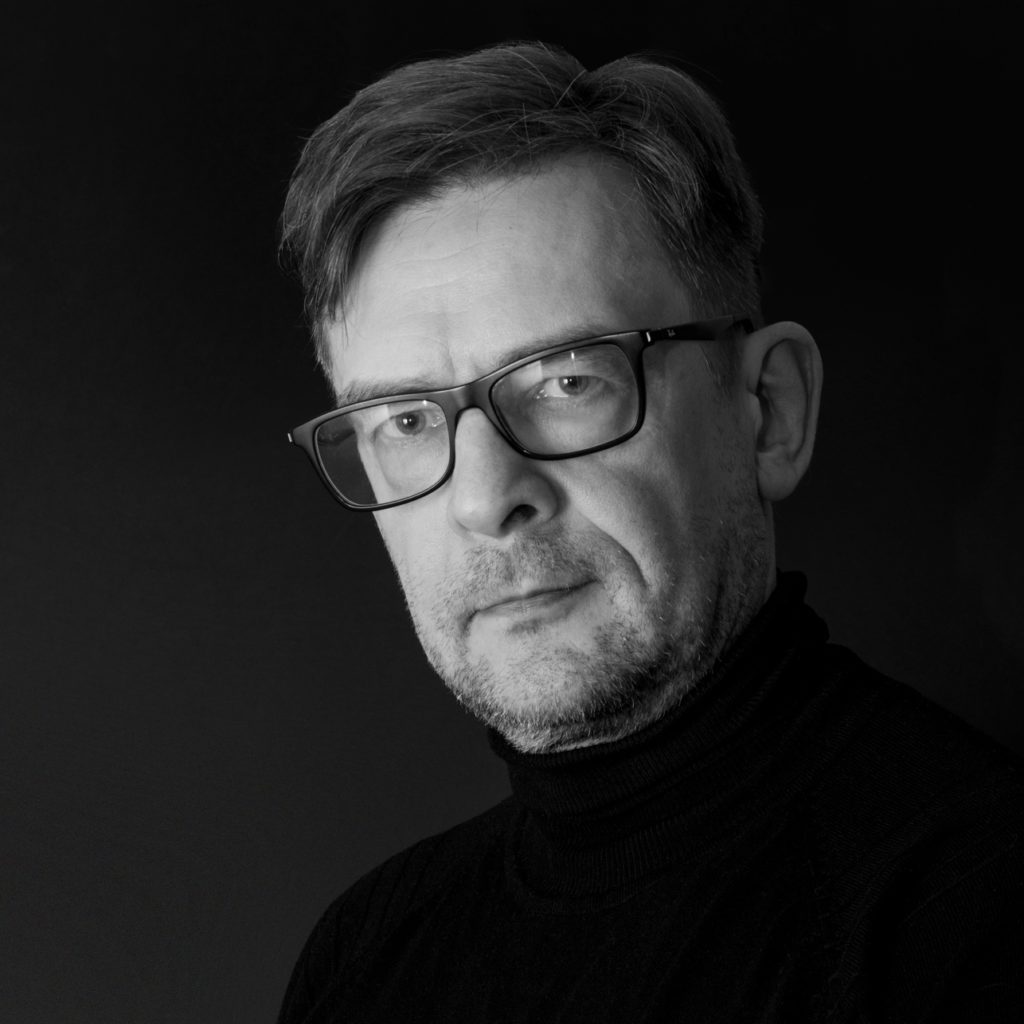 The Rothko Centre: Right now, we’re receiving your exhibition, The Sea of a Thousand Dreams. Why this topic – underwater photography? What captured you there?

Andres Adamson: I once saw something along these lines. And I thought – interesting, could give it a try. Actually, I believe no one has really done it before, I mean underwater studio shots. Yes, there are scuba diver photos, but that’s different. That’s reporting, not my thing. I’m interested in controlling the light, playing with the positioning of my models and changing the environment…

RC: Not the easiest thing to do in terms of technique.

AA: No indeed (laughs). There were difficulties to start with. I had no special equipment. A friend helped me throw together a solution with a plastic bag, so I could immerse the camera underwater. I went to a regular stationery shop and bought a re-sealable plastic bag I could tightly close. As to the object lens – my friend really has “hands of gold” – he adapted a tube-shaped detail from an old computer for extra water resistance. Armed with this makeshift gear, I could attempt a brief submersion. Naturally, I was anxious the water might seep through, anxious about my camera. And it did seep through (laughs). A bit later, I found more solid bags, really waterproof. For the flashbulbs, too. Because I needed an assistant who would hold the flashbulbs on an improvised “fishing rod” (a special support). I found some costumes, a few from the theatre, a few here and there, from the wardrobes of my acquaintances. The red dress, for instance, is from the theatre. A few girls wore their own things.

RC: And who were the models?

AA: The daughters of my friends and acquaintances. Initially, I looked for girls with long hair – it looks amazing under water, taking different shapes. And some light, airy dresses. Turned out a leotard also looks great.

RC: And what about nudes?

AA: As a matter of fact, I did try them. Not my thing. Doesn’t work for me.

AA: I don’t know (laughs). I guess it’s all too out in the open and obvious. Very hard to get an aesthetic picture. Or maybe it’s due to the models, I don’t know. In any case, I’m drawn by the limits of the human body and its ability to take different shapes. But I do think there’s a limit there. Yes, there are dancers or just naturally flexible people, who feel at ease in their own body. They look fantastic because they know they’re beautiful and aren’t shy to show it. And they’re up for experiments. The slightest hint of stiffness, and we’re done. It’s not working. 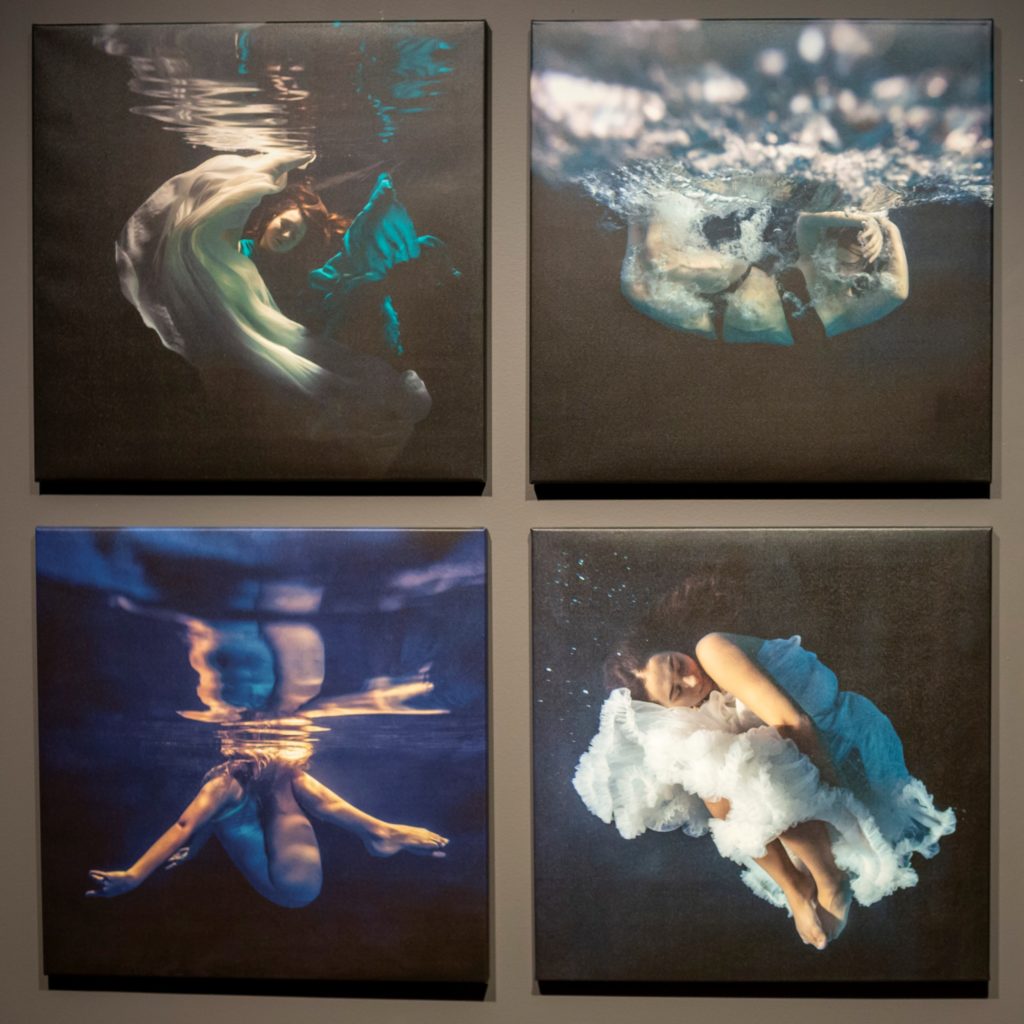 RC: What challenges do you experience in your projects?

AA: Deadlines. And communication on a scale like I had in the 100 Homes in Pärnu project. In a more or less constant location hunt, constant negotiations, I burned myself out and lost interest. It’s tough.

RC: You work with people and natural objects. What draws you to flowers?

AA: Now, this topic caught my attention during the first “Covid spring”. There are masses of flower photography series all over the world. I’m by no means the first. But I came across this one picture with a photograph for background. So cool! I didn’t want to copy it. No, I thought I could make something of my own, something beautiful. Not in a studio. That had already been done. So I went out into a field, put a blackboard behind a layer of flowers and set about catching the natural light. I adore orchids, our Nordic ones. And the rest of our plant life, the simple flowers and even weeds – they’re fascinating! I called this series Hortus Dei (God’s Garden). Meaning that we’re all plants in God’s garden.

RC: You also do abstraction and minimalism…

AA: There’s this idea that an artist should choose a topic and stick to it. But I’ve never wanted it. It just felt bland. In fact, the upside of my versatility is that I’ll always find something to do. You can always find an exhibition or a space for your different kinds of work. And they say eclecticism is endlessly fascinating. So I decided it would be my style (laughs).

RC: What do you think about borrowing an existing idea as a foundation for something of your own?

AA: It’s perfectly normal. After all, I’m not just mindlessly clicking the button. I have to come up with a fresh perspective, my own take, and draw out the life of the original idea.

RC: You’re a travelling photographer. Which place on earth is your greatest inspiration?

AA: Tuscany. I had an exhibition about it. I’ve worked there, let me see, about four times. But then I began spewing clichés. I’d started with them, and now I’d come back.

RC: Artists tend to be wary of clichés – they fear them and try to avoid.

AA: And what’s so bad about it? In fact, I quite often start with a cliché and then move to something new, exciting and original, something of my own.

RC: Do you give yourself a break?

AA: Of course I do. Even now, I’ve come down from Estonia with no camera. I’ve only got my phone, so I’ll just shoot some videos (laughs).

RC: Do you keep track of global trends in technology development, or do you prefer tried and tested devices?

AA: I’m not chasing innovation. I shot with a Canon for a long time. It just so happened. But then it got broken, and I had to get a new device. Turned out it had much more interesting options, such as the macro setting. That was it. I went with that one and, as of now, have no intention of changing it.

RC: Do you have idols, someone you look up to?

AA: Lots. But, yes, I can name a few. I like Wes Anderson. He’s a film director. But, at its core, film is photography. And his colour compositions are incredible! The overall compositions in his frames. I find them fascinating. Then there’s the Lithuanian photographer, Virginijus Kinčinaitis. He shoots on his mobile. I’ve seen his exhibition. Naturally, if you look very closely, you see there’s a difference. But from a distance, the composition is very eloquent. Stunning. I, too, started with a phone to avoid hauling around heavy equipment. You just need a good eye. Andrius Repšys and his extreme minimalism. What rhythm, what edges! A millimetre off, and that’s it! Everything’s changed! I gave it a try, but it’s incredibly hard (smiles). Gregory Crewdson – everything so carefully considered, down to the last detail. Julie Blackmon, the American. She photographs her relatives, her family. Sometimes staged shots, but obviously not always.

AA: That would be composition. The right focus in the right spot.

RC: Care to try and defend an opinion that photography is art?

AA: I’ve thought about it just recently. I guess art is when I can do things the way I want. And not the way you want me to. And I think, at its core, art is about professionalism. An artist should command their material. You can see right away when something’s been done by an amateur. And that can’t be art. Technically, it’s a meeting point for an idea and creative freedom. It’s where they merge. I’ve seen lots of pompous, “overdone” works with masses of Photoshop. This might work with those who’ve never encountered it. But I draw the line. Your “intervention” shouldn’t be visible. If you use Photoshop, it should be justified and enhance the artistic value of your piece. But if a shot is reeking false pretence due to excessive Photoshop… that’s just terrible.

RC: Do you have a maxim or a motto, your personal philosophy, that’s your solid ground to stand on?

AA: Cross that bridge when we come to it. You’ve got to start somewhere, and all the problems and challenges can be dealt with along the way. I keep going towards my goal. If you can’t conquer your fear, you’ll never succeed.

Daugavpils Mark Rothko Art Centre Daugavpils Mark Rothko Art Centre
Read more
Other news
We use cookies on our website to give you the most relevant experience by remembering your preferences and repeat visits. By clicking “Accept All”, you consent to the use of ALL the cookies. However, you may visit "Cookie Settings" to provide a controlled consent. Read More
Cookie SettingsReject AllAccept All
Manage consent