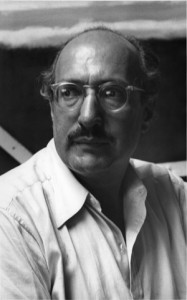 “…I paint very large pictures. I realize that historically the function of painting large pictures is painting something very grandiose and pompous. The reason I paint them, however – I think it applies to other painters I know – is precisely because I went to be very intimate and human. To paint a small picture is to place yourself outside your experience, to look upon an experience as a stereopticon view a reducing glass. However you paint larger picture, you are in it. It isn’t something you command.”

“The progression of a painter’s work, as it travels in time from point to point, will be toward clarity: toward the elimination of all obstacles the painter and the idea, and between the idea and the observer.”

Statement on the artist’s attitude in painting, 1949.

“…I’m not interested in relationships of color or form or anything else. I’m interested only in expressing basic human emotions – tragedy, ecstasy, doom and so on – and the fact that lots of people break down and cry when confronted with my pictures shows that I communicate those basic human emotions… The people who weep before my pictures are having the same religious I had when I painted them.”

“It is widely accepted notion among painters that it does not matter what one paints as long as it is well painted. This is the essence of academicism. There is no such thing as good painting about nothing…”

“The recipe of a work of art – its ingredients – how to make it -the formula.

“Modern artist have take all of man’s plastic achievements and separated it into different antagonistic components. Therefore, in their abstractions they have carried the world of tangibility, and the tactility of the plastic world, to their logical conclusions, producing pictures which have made of the painting a thing in itself, as freed as possible from human associations. On the other hand, in the world of illusory painting, they have carried the pictures into the realm of its utmost illusions: the subconscious. And they have consciously made varying arrangements of the two simultaneously in the attempt to hint at the ultimate unity of these worlds – a unification we are yet far from achieving”.

Extract from the book “The Artist’s Reality: Philosophies of Art by Mark Rothko”, chapter Modern Art as the Reassessment of Art Experience, p.110.

From a letter co-authored by Mark Rothko and Adolph Gotlieb to New York Times, the 13th of June, 1943.

“I think of my pictures as dramas; the shapes in the pictures are the performers…Neither the action nor the actors can be anticipated, or described in advance. They begin as an unknown adventure in an unknown space”.

We use cookies on our website to give you the most relevant experience by remembering your preferences and repeat visits. By clicking “Accept All”, you consent to the use of ALL the cookies. However, you may visit "Cookie Settings" to provide a controlled consent.
Cookie SettingsReject AllAccept All
Manage consent