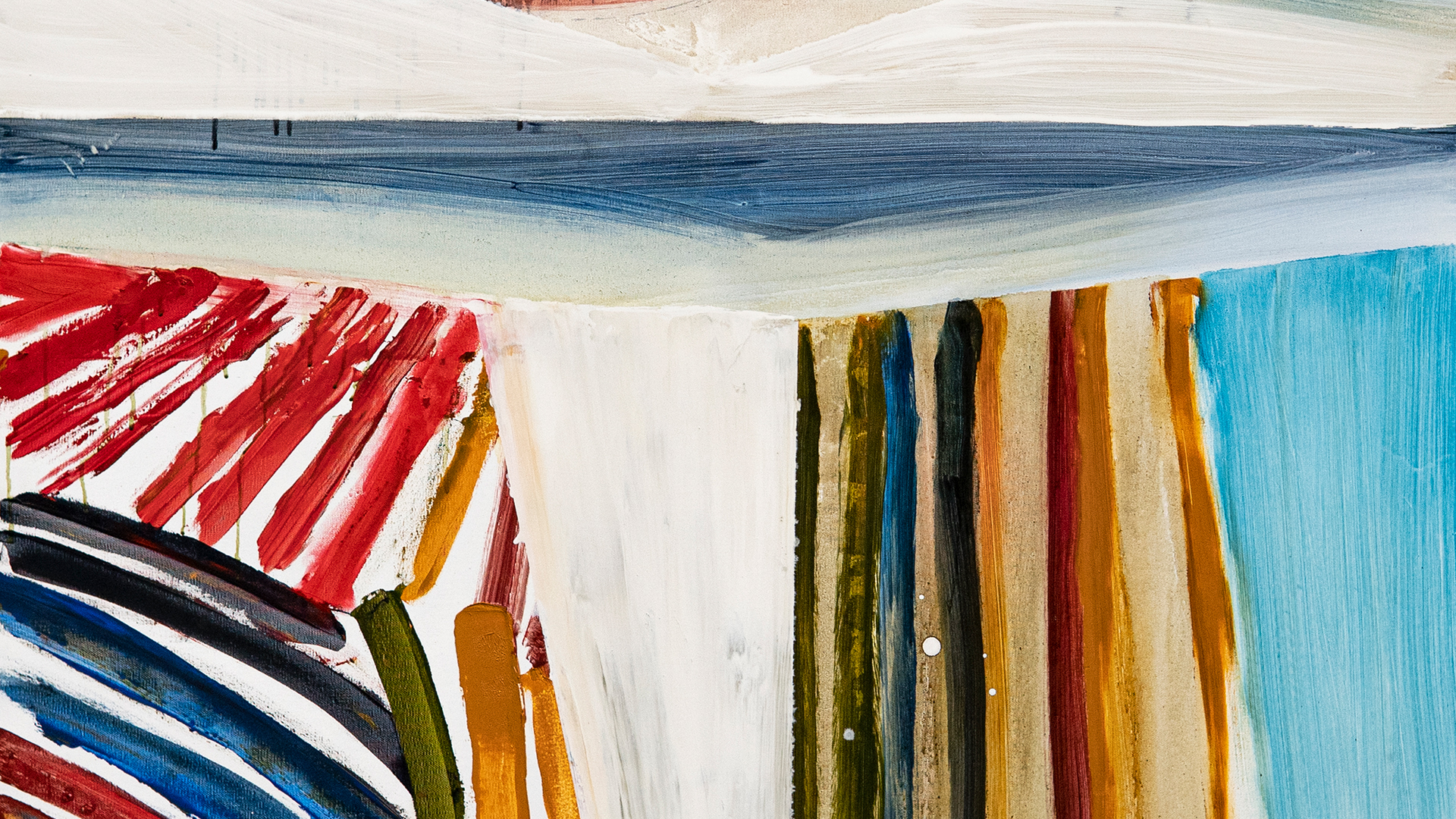 The latest solo exhibition by Jānis Kupčs features artworks from three distinct painting projects – The Bellies of Ships, In Search of the Lost Villages and Cruel Romances. What they all have in common is the author’s watchful intonation combined with his particular artistic expression. The sizeable fragments of The Bellies of Ships, much like the works from the Lost Villages series, are creative records of the author’s observations – made in nature, captured in photography and then recreated in painting. They are close-ups of ships coming into port at the Ventspils Harbour and images from the author’s photographic expeditions to the nearby coastal villages that are no more. Meanwhile, the Cruel Romances distillate the author’s impressions of Latgale from the scorching summer of 2021. The leading thread in the third series is geometry – it struck the artist at the tiny Rekova Church and now runs from painting to painting, binding them all together, like links in an ex-voto[1] chain.

Jānis Kupčs (1969) works in two mediums that contain his continued creative pursuits from project to project. The two are ceramics and painting. Having graduated from the Tallinn Art University, Ceramics Department, Kupčs went to the Art Academy of Latvia, where he got his master’s degree at the painting workshop of Aleksejs Naumovs and Kaspars Zariņš. From 2000 onwards, his exhibition record has swelled to more than 15 solo shows, mainly in the painting medium, with titles that suggest a poetic and postmodern perspective – Bunnies are Light Sleepers, The New Life of a Paper Ship, In Search of the Lost Villages, The Bellies of Ships, etc. For all that, literary references are only present in the titles – although Kupčs roots his paintings in real-life forms, he paints abstractly, so the leading forces in these series are the author’s painterly technique and the material properties of colour. Naturally, there may be a recurring image, a refrain in a ballad. In The Bellies of Ships, it is the watermark that crops up in several paintings, whilst In Search of the Lost Villages has a recurrent delicate line – a trace of a one-time village all but hidden from view by overgrown shrubs.

Meanwhile, the artist’s spatial projects in the ceramic medium combine rich cultural layers with a touch of tasteful irony, especially in his latest solo show (2020) at the Porcelain Museum with an evocative title – Pushkin Had Four Sons, All Idiots. Here, Kupčs playfully references Daniil Harms in the headline whilst the contents of the exhibition draws the viewer into a witty dialogue, asking to recall different cultural artefacts (The Ears of Culture, Apples of Great Import to Humanity), and translates popular expressions risen to the ranks of modern folklore from his Soviet childhood into grotesque miniatures – Marta Krustiņsone Is Guarding Lenin, Militsiya Officer or Karate Fighter (Who’s Tougher).

In his painting, Kupčs is emotional, sensitive and (un)afraid to get vulnerable. The geometry of the Cruel Romances refers to a feature in the touching interiors of the Our Lady of Sorrows Roman Catholic Church in Šķilbēni (Rekova) – its diamond pattern surfaces from varnished plywood, arranged in endless rows. Like beads in a rosary. Or the little chains with tokens of gratitude from the faithful whose prayers have been answered – the so-called ex-votos that adorn Catholic icons. Most commonly shaped like hearts, hands, arms, legs or eyes, they show the reason for the grateful offering. According to Sister Mary from Aglona, who has been studying ex-votos since 2009, “it’s harder to make sense of a heart-shaped ex-voto… Is it love, or just a heartfelt thanks?” True, matters of the heart are never easy. Perhaps the Cruel Romance is the artist’s parable of creation, referencing Without a Dowry, the 1879 play by Alexander Ostrovsky, and its cinematic adaptation from 1984, A Cruel Romance by Eldar Ryazanov, where there is no other love but self-love and callous self-inflicted separation with imaginary chains/shackles[2]. Only in the artist’s case, they are the chains of duty to his creativity. One must be cruel to create. Harden one’s heart to the world and to one’s fellow men, which is why romances (in this case – paintings) are as cruel as they are beautiful. By their very existence, they expose the artist’s vulnerability. In a sense, the Cruel Romances of Jānis Kupčs are his ex-votos, urging us viewers to think about our own “answered prayers” and forms of gratitude.

[2] Larisa. But I don’t demand anything from you; I only ask for some sympathy. At least cry with me!

Vozhevatov. I cannot. I can do nothing.

Larisa. You are in chains too?

Larisa. Of what kind?

Vozhevatov. My merchant’s word. (Goes into the coffee shop).