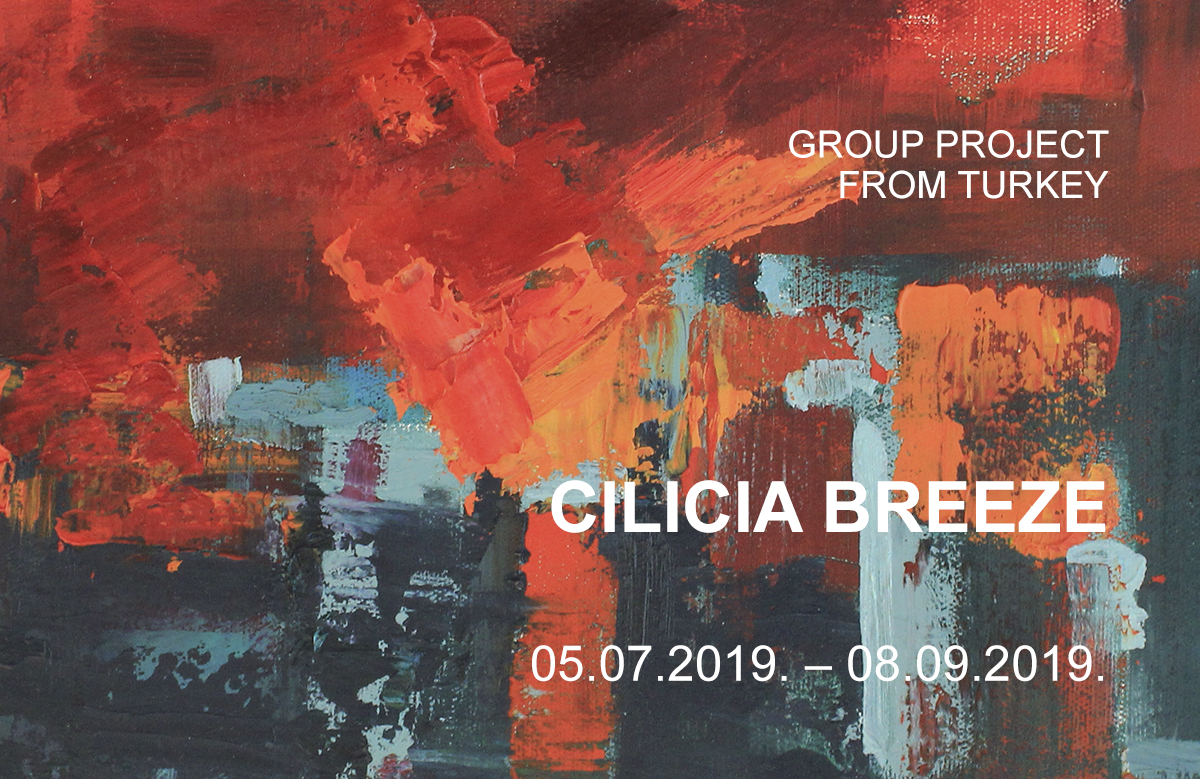 The geography/culture encompassing the meanings, values, identities and subjectivity signifies the place where the “self” is re-discovered, experienced and re-produced. The artists who are after creating their own myths are nourished by the light, colours, textures/patterns, history and culture of the geography they are surrounded by, no matter how much they are influenced by the surprising aesthetics of artists around the world. Artwork in this exhibition points to the need to build a shared reality through individual voices of the artists. Each piece of art reflects the artist’s sensitivity. As a whole, the exhibited work represents a reality far beyond the culture of the artist as experienced.

Anatolia, especially Cilica, is a colourful geography full of lights, which hosts different languages and beliefs and is made up of diverse cultures. It is both gloomy and exuberant. It is both far away and very close. It is a meeting place for diverse cultures. While art is being globalised on one hand, on the other it makes it possible to push the limits to leave room for new experiences. The artists from the cradle of diverse eastern and western cultures are here to share the colours, scents and forms they experienced and observed.

The artwork was produced in this area by a group of artists who teach at Çukurova University in Adana, a city located on the southern edge of Turkey, on the Mediterranean coast, in Cilicia.

Professor. In the last years of his life, he focused on a series of storytelling featuring a kind of fantastic, powerful black humour as a form of social and political criticism. To keep the audience busy with narrative, he removed all the colours from his palette. He summed up his opinion of art:

“What I am mainly interested in is how we can get to know the World drawing on the possibilities that art offers. I say that any way of thinking which makes us doubt whether we can or cannot really know the World has lethal consequences for both art and life.”

Professor. Nature and colour are at the focus of Nimet Keser’s recent studies. After experimenting with different genres, techniques and approaches, she started to paint abstract gardenscapes, taking colour into the focus of her artistic interest. In her recent paintings, contemporary empressionist and abstract empressionist approaches can be seen. Her true passion is natural beauty, landscapes and flowers. She transforms familiar vistas into striking rhythms, playful colours, fresh paint and emotional effects.

Professor. The son of Zeus, Apollo, sees a beautiful young girl on a riverbank. This exceptionally beautiful nymph is Daphne. Seduced by her beauty, Apollo approaches Daphne, but she realises what he intends to do and begins to run. Apollo chases the fleeing girl. After a while, Apollo gets so close to Daphne that she hears him breathing in her hair. Seeing that she cannot escape any more, Daphne abruptly stops, digs the ground with her feet and cries out: “O mother earth, cover me, save me, protect me.” With this sincere plea, her fragrant hair becomes leaves, arms become branches and feet turn to roots stretching deep into the soil. She is now a laurel tree.

This story takes place in the ancient Cilicia/Harbiye, and today the tears of Daphne flow down as a waterfall there. I hope the soaps made from the leaves of a laurel tree will smell like Daphne.

Professor.  Objects that we use daily, their unknown, invisible states stand there for an artist as a secret world waiting to be discovered. The process of one object being transformed into an work of art is closely related to its knowledge and story. Contemplating an object and designing it is related to how references to the historical and evolutionary process of the object are passed down to the present day. With this belief, the artist prefers to use materials that were a part of the historical experience of his geography. The wood he used in his sculptures comes from the railroads that represent the ideology of the new republic and crisscross the country. The other material, iron, is a symbol of Cilicia’s ancient history related to the Hitties. The unification of iron and wood is an embrace of the symbols of the ancient period and the modern era of geography and culture.

Associate professor. Özgür Aktaş’s main field is graphic design but he works on multiple approaches with different subjects, techniques and themes. Yet his main focus is to produce social and political criticism through his graphic work, painting and prints. He prefers to express his ideas at a point where figurative and non-figurative approaches intersect.

Lecturer. Cem Demir has always produced art in a frame of the socio-political context. Each of his paintings is an allegory that contains symbols of social and political criticism. While he criticises his own social and cultural context, he maintains a connection with the global art history and makes references to its masterpieces.

Research assistant. In her research and practice, Sevgi Arı mixes different techniques on canvas. As a graphic designer, her recent work can be explained as a combination of collage and pattern work, which grows relationally in itself. The eye jumps from one area to another in a composition whose surface hides many layers. The story behind her paintings depends on the notion the viewers relate with.

Research assistant. Handan Narin’s artistic interest in her painting is to place the colours on the surface in a balanced manner by considering certain ratios and to take the textural effect created on the surface by overlaps of the paint and use it as a means of expression.

Research assistant. Kerem Atar’s recent artistic research is about the concept of disgust in art. In his opinion, just naked meat is a certain border. Meeting with it reveals a feeling of uneasiness with death and the discovery of the fine margin between life, the past and the future. For this reason, his work turns the feeling of uneasiness into pleasure and helps us enjoy the inevitable. His works are attempts to affirm and acknowledge the past.

Research assistant. Ömer Erdem has always been interested in images imprinted on our social memory. One of these images is a screenshot of the national media channel TRT. The test pattern/test card of TRT has become the symbol of television for a few generations. And now, he tries to produce graphical images based on the TRT test pattern to remind us of the source of our visual and political ideology.

Research assistant. The main aim of Tayfun Akdemir’s pictorial work is to keep the relationship of the viewer with the physical reality at the cognitive level. Therefore, the illustrations in the image are designed to represent two-dimensionality. The relationship of the elements in the picture is based on an arbitrary formatting that is not formal. As an artist, he believes in the entropy between the mandatory structure of arbitrary formatting and the perceptions of the viewer.

Research assistant. Semiha Yıldırım’s work reveals a relationship of random, found objects and images. Her compositions consist of a combination of untouched and unrelated objects in a timeless and uncertain space. The familiar objects in her work move away from harmony and definition with their togetherness and create a mystery within the space in a way abstracted from dimension, shadow or their functions.

Research assistant. Belgin Boran’s art is based on opposite concepts. Lately, she discusses the opposition of death and life/immortality. In her work, bone forms are turned into goddesses. The most rigid, unchanging part of our body is transformed into the symbol of productivity, and the source of life. She focuses on bone because it is the last destroyable part of our physical presence. So, if there is anything immortal about us, it is our bones.