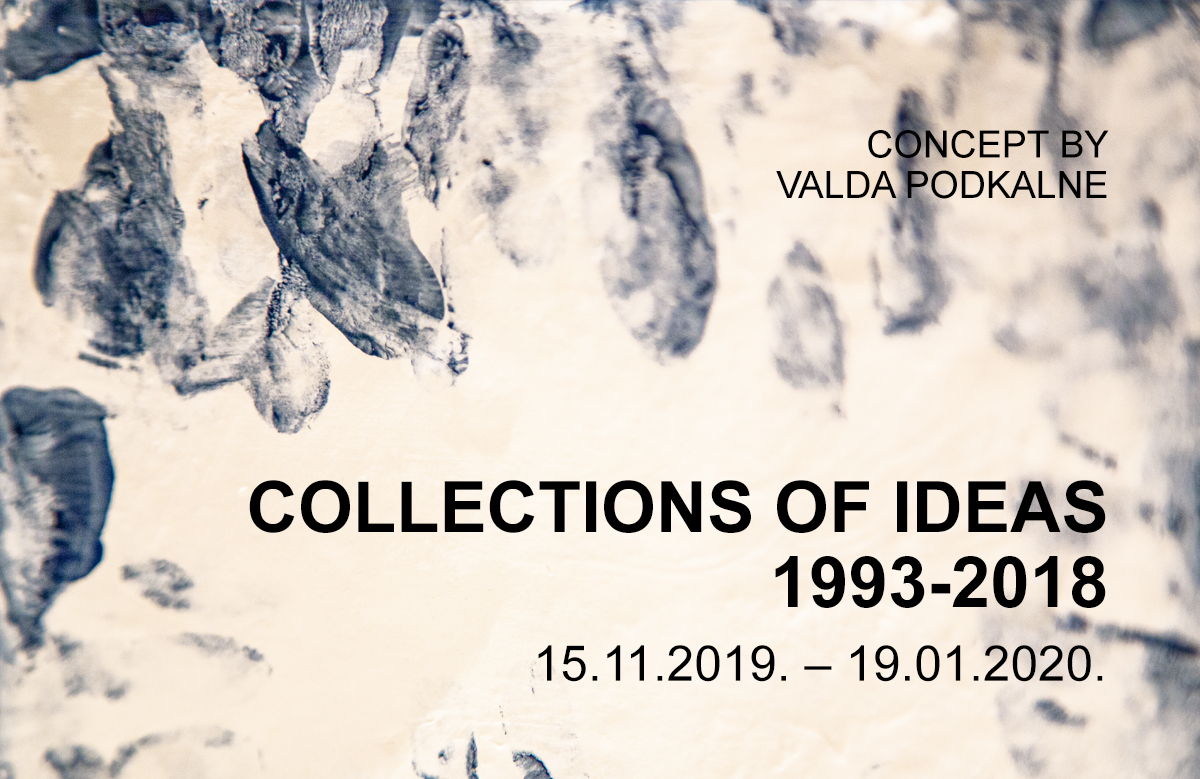 “The initiatives of Valda Podkalne are like seeds of desire, hope and joy, scattered into the world as if into a soil, in good faith that these seeds and all the bits of information they contain will one day come to a wonderful growth and flourishing.”/ Harald Jegodzienski /

The exhibition “Collections of Ideas” is a concept initiated by artist Valda Podkalne. It features two series of exhibits, a collection of conceptual mugs from 1993 and porcelain blocks created in 2017/2018. All the work is united in that that the shapes were designed by Valda Podkalne and then painted or otherwise creatively developed by many other artists, chosen and invited by the author. If such creative cooperation is a common practice in industrial design, in contemporary art it is a much rarer phenomenon. This social project of Valda Podkalne, which spans centuries, involves 34 artists of major significance in the cultural scene of Latvia. The BLOG.KS Catalogue was created as a vivid documentation of this event.

Valda Podkalne is an artist who works not only in ceramics but also in photography and conceptual installations. She is a prominent contemporary artist, renowned in Latvia and across Europe. Her work is held in various European museum collections and has garnered both European and local acclaim in artistic events such as biennales and international exhibitions. After graduation from the Industrial Design Department of the Art Academy of Latvia, she taught at the Academy’s Visual Communication Department. Taken together, she has taught at the Art Academy of Latvia for 27 years. Currently a free artist, Valda Podkalne has a dynamic exhibition life, rich in solo exhibitions where she uses different media to reflect on her memories, turns of life and encounters.

Describing the style of Valda Podkalne in the 1990s, Daiga Rudzāte wrote the following in the BLOG.KS Catalogue: “Valda’s vessels seemed to come from a geometric world envisioned by a mind exclusively shaped by exact sciences, where everything was expressed in cylinders, triangles, polyhedrons, spheres and ellipses, with a coating of pure, bright colour in the same geometric rhythm.” In 1993, Valda Podkalne invited a number of artists to paint her cups, the group included Inese Brands, Romis Bēms, Anatolijs  Borodkins, Andris Breže, Indulis Gailāns, Helēna Heinrihsone, Ivars Heinrihsons, Pēteris Martinsons, Sarmīte Māliņa, Anita Meldere, Andra Neiburga, Juris Putrāms, Maruta Raude, Māris Subačs, Ingrīda Zābere and Vilnis Zābers. Bastejs Gallery hosted an exhibition “For Collectors”; Anatolijs Pjatkins recorded the opening ceremony, and the video still survives. Daiga Rudzāte goes on to say that “from a contemporary viewpoint, this exhibition and its exhibits are more than just unique design objects. They are striking documentary sources that captured Latvian artistic processes and artists as they were in that particular time. To an extent, it was a time of a creative seizure, when elements such as game and experimentation played a crucial role. “I wanted it to be a fusion of generations; with authors representing the most diverse fields of art.” By offering to paint the cups, Valda Pogkalne opened to them a different, unfamiliar plane, that of a white and smooth porcelain surface.”

“25 years later, now that a new generation of artists has grown, Valda repeats this initiative with 17 young artists. [..] First of all, it might seem a little odd to give these young, rebellious and nihilistic, bohemian and idealistic, postmodern, Western air-sniffing, bold and neurotic, overly intellectual and overly sensitive people a task of painting something so clearly defined, philistine and bourgeois as a china cup. Secondly, in the case of a cup, the artist is guided by the condition of maintaining its functionality. A block doesn’t have this condition, and the artist’s freedom is unrestricted, as we see in the ways this freedom has been used,” Helmuts Caune wrote in the introduction to the BLOG.KS Catalogue.

The series of porcelain blocks were processed by GolfClayderman Association, Katrīna Čemme, Kaspars Groševs, Haralds Jegodzienskis, Jānis Krauklis, Ieva Kraule-Kūna, Maija Kurševa, Andrejs Lavrinovičs, Anete Melece, Katrīna Neiburga, Ojārs Pētersons, Beate Poikāne, Krišs Salmanis, Evita Vasiļjeva, Evelīna Vida, Lote Vilma Vītiņa and Amanda Ziemele. Valda Podkalne also worked with both shapes, the cup and the block, interpreting them and thus assuming the double role of initiator and creator, standing side by side with the artists addressed in the project. “The block is the end result, a product derived from the energy and capital of trust accumulated within the confines of these very narrow and specific social relations,” Helmuts Caune concludes.

“More often than not, we shy away from putting ourselves and certain things in a line, side by side, or from juxtaposing them. The intimate sphere must be respected, and there is a general desire to disassociate oneself from the other. [..] On the other hand, if people and things are placed in close proximity to one another, thereby reducing alienation, it allows for the emergence of differentiated discourses: the nuances of various aspects burst into bloom, nuances that had been observed as present before, but now become luminously clear. [..] The consequences of such a process of bringing together, be it people or things, can be a divorce from the irrelevant,” writes one of the project participants, artist Harald Jegodzienski, “As a project, BLOG.KS forces us to rethink, to recognise the roots of seemingly unbreachable walls: each building stone from the whole ensemble blossoms in the wealth of its individual fantasy and energy drive.”

I want to conclude my presentation of this social art project, which Harald Jegodzienski calls “social work” but Helmuts Caune defines as a “social product”, with the final sentences from Helmut Caune’s introductory text to the BLOG.KS Catalogue: “The artists’ creative outputs and their complementary texts are historical evidences of a place, a time, and the lives of the conscious minds that inhabit them. Valda made it possible to register something that seems meaningful to someone through the simultaneously tame and capricious medium of porcelain, and now this meaning is also available for contemplation by the rest of us, that is, by everybody else.”