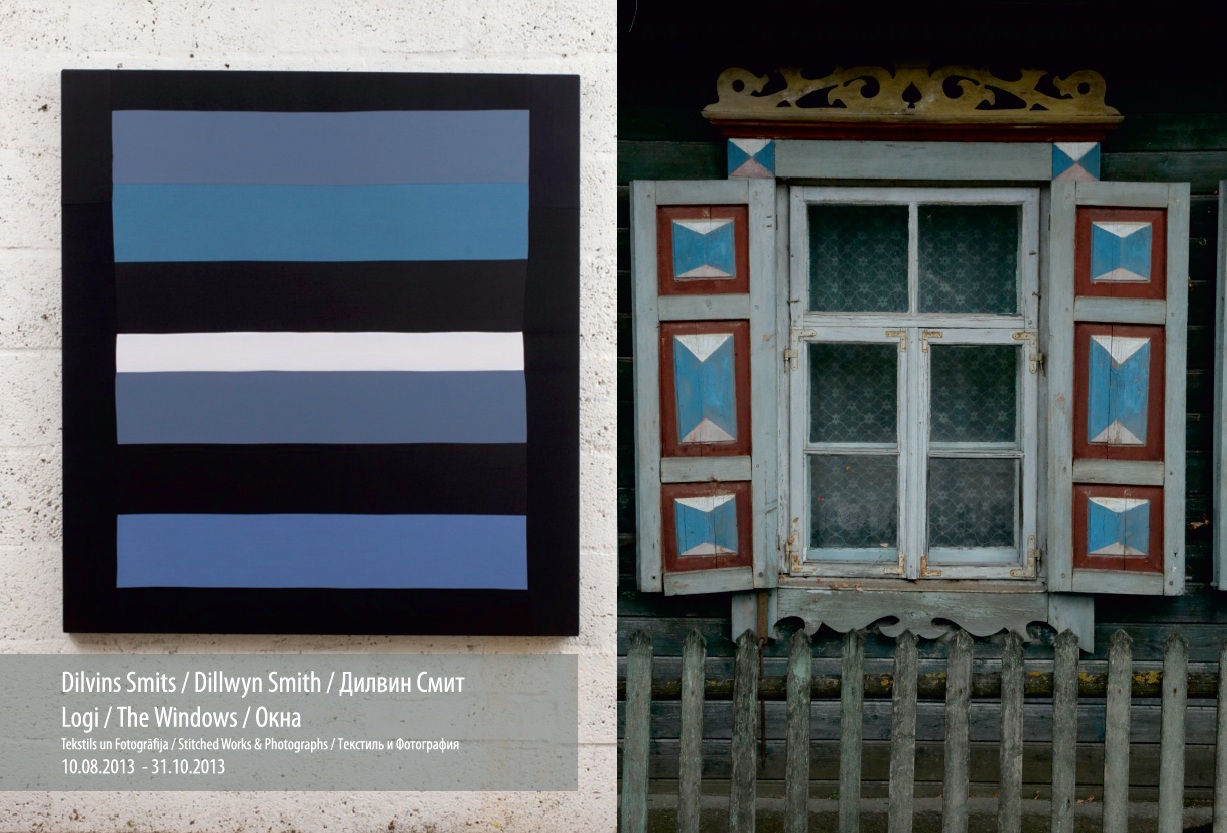 The latest works by Dillwyn Smith show his growing interest in organized spatial relationships between color and form. Continuing the tradition of geometric abstractionism, his works hold a dialogue with color fields of Barnett Newman, Ellsworth Kelly, Mark Rothko and Blinky Palermo.

Recently, the artist has given preference to textile works instead of his traditional painting technique. His textile works emerge from impressions travels have left on him. The idea about the project “The windows” evolved when Dillwyn participated in the plein-air “Mark Rothko 2012”. The impressions made by the local landscape and the traditional life style, motifs that had captured his imagination – all that has become the material for artistic images. Quite often, the impressions obtained from reality are given unexpected interpretations, showing well-known things in a new perspective.

Our wooden houses with their multiform range of colors turned out to be the happiest surprise for the artist during the September session last year. “It’s amazing in what multicolored city you live! I have nowhere seen anything like this!” – this is how the city of Rothko opened before Dillwyn Smith, when going around Vecie Stropi, Grīva and Jaunbūve he kept taking out his camera. He was fascinated by the rhythm, by fretted windows and shutters, and, of course, by color! All, that he has felt and emotionally experienced and then metaphorically shown in his works, bears relation to the city, to the creative work of Dillwyn Smith, to the Dvinsk of Mark Rothko’s time. Then Dillwyn came again in winter to test his feelings and see a snow-covered city landscape. He is absolutely convinced that the image of a native town has always been alive in Rothko’s memory, because people keep their childhood impressions in memory throughout the whole life.

At the symposium dedicated to Rothko’s 100th anniversary, his son Christopher said in his lecture: “…Classical works by Rothko are often compared with windows. The form itself and colors of his canvases suggest this analogy; however, these windows are closed, walled up by sensual color. They do not invite to look outside – they help to look inside oneself. Due to their size and tempting conspicuousness, classical works capture attention but do not open up any horizons. On the one hand, artist’s inner world is reflected in them, on the other – they also reflect those feelings and emotions which we (viewers) project on them.”

Person’s links with his birthplace are mysterious but unquestionable, and, who knows, perhaps these colorful windows of small wooden houses of Dvinsk (in one of which the Rothkovitch family lived), like an echo, have returned in Rothko’s pictures through the stone jungles of a huge city.

To have the feeling of “place” in his pictures, the artist uses fabrics purchased in local shops. In the palette of “The Widows”, a metaphor of our landscape can be traced: with its basic blue, green and yellow colors – like in the traditional Latgale ceramics. When choosing the material by its color and texture, Dillwyn is guided by his feelings or unexpected associations. For instance, having taken the fabric into his hands, he says: “I remember myself as a small child touching my mother’s skirt, and this feels just like the same material”. Colorful ribbons are stitched vertically and horizontally, like strings. And the compositions themselves are melodic, they have rhythm and music. Sometimes they are built on subtle nuances in color, some other time they are polyphonic – like a complex musical chord built on laws of a special harmony.

Works by Smith are material and warm – they are hand-made and keeping the warmth of these hands. Having noticed a seam that is not quite straight the artist, smiling, leaves it as it is, as a reference to human imperfectness.  Affirming themselves in space, these works hold dialogue with architecture, with photography. They attract our attention to the peculiarities of the environment, but at doing this they do not tend to emphasize themselves but rather create the feeling of comfort and peace, because they are oriented towards human measures, towards exploring relationships between people and the world they themselves have created.