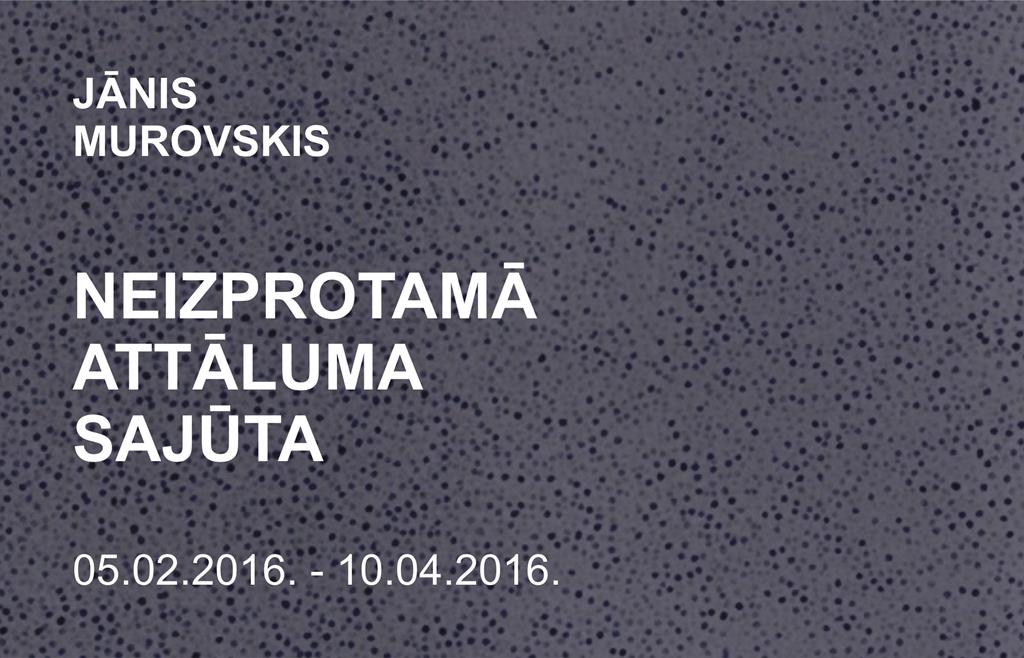 exhibition THE INCOMPREHENSIBLE FEELING OF DISTANCE?.

“Instead of text I would go for ciphers, dots and stripes drawn with passion.” Muris

“Man is the measure of all things.” Protagoras

Already for many years “Inconceivable feeling of distance” has been the matter of contemplation to Jānis Murovskis or Muris as he is called by his family and friends and that is how he signs his paintings done in screen printing technique.  Prior to him, the same was philosophically inquired by Protagoras whose famous quote firstly relates to anthropometric (folk-derived) units of measurement. Those were not stocked in closed cabinets for weight and measurement but instead refined in farmsteads and used for daily needs. These measurements were derived from bodies- human body and the tools that were considered as extension and expansion of the body. The measurements of animals and birds living in surroundings were added up. They were detailed and, in fact, even very accurate.

The length was expressed in feet, steps, forearm cubits (great, small), underarms (full arm cubit), fathoms of outstretched arms, thumbs and palms. The measure of height could be indicated as – up to ankles, shins, knees, crotch, waistline and breast. To the neck – is a clear and straightforward unit of measurement with the metaphorical meaning adhering to it later.

In addition came the length of drill furrows, arrows, oars or strokes, a stone’s throw, hen’s step, hare’s jump, width of horse’s mane; the acoustic dynamics – the song of rooster, dogs bark, cat’s scream, the distance of a scream or calling and finally we talk about a gunshot as a measurement of distance.

The size or greatness was compared to man’s stature, body of hen, hare or fox. Reference to the height of the sitting dog may rather be a misleading relativism and was not used.  The width was measured by jūdziens – oh, isn’t this amazing – meaning the part of field ploughed in one morning)!

The volume that human body can intake was expressed in mouthful, spoonful, vessels for liquids šāle (0.15 litres) čarka (0.123 litres), škaļiks (0.0615 litres). Something that was closer to resemble the dimensions of human body – dipper, flask, barrel etc.  All these measures are reliable from the perspective of the man. If the screen printing could be referred to as “expansion” of Muris’ width, then the most significant measurement is the estimation by eye. And here we come to the organic variations from “eyes of a hawk” to “what the eye sees, the mind should not take for truth”, as one of Muris’ colleagues in Academy of Art used to say. People from the digital world speak of the perception of external world in a more exquisite way they say – zoom in, zoom out. In any case, the screen printings by Muris have all the above-mentioned characteristics. It is a research within the range of eyesight that activates the whole territory not only the Bartesian punctum.

Muris declares that “spatial orientation is a sense given to us by nature. In works that have no spatial reference points – such as letters, horizon etc. – the indicators of how to accomplish the work are dictated by intuition or anticipated visual qualities.  Be it a flow or fall. The depth that will follow later. In works on canvas where the printing surface is used 100%, the direction of exposition is determined visually by identifying the best “fit”. Yes, the result can be different from the initially anticipated.”

The viewer’s perception is addressed with little notes by Muris. “Through the trees, it seems, the Sun is being dissipated” (“Vējš”/”Wind”). “Sounds put you to sleep and in a while you don’t notice as they start sounding in you” (“Koncerts”/”Concert”).  The unity of picture and the text resembles of “Pasāžas” a mini-book by Kurts Fridrihsons and Imants Ziedonis, which became a special treat for all those who loved to continue visual text charades. They bring you to the place where words and images are not differentiated. Players of card game zole know that to win the game you need to leave opponents in “bezštoks situation” with zero tricks taken or so called “bezstiķis”. Muris does not play zole, but since the times of studying at School of Applied Arts in Riga, where he started working during nights to finish the artworks for the expositions and at times it got difficult to find strengths, as a habit he often utters the word – “bezštoks”. His gambling passion is screen printing. It draws you into the process and gives the feeling of leaving the opponents with “bezstiķis” – the winner’s feeling.”