José Manuel Ciria Before the Title, Beyond the Surface 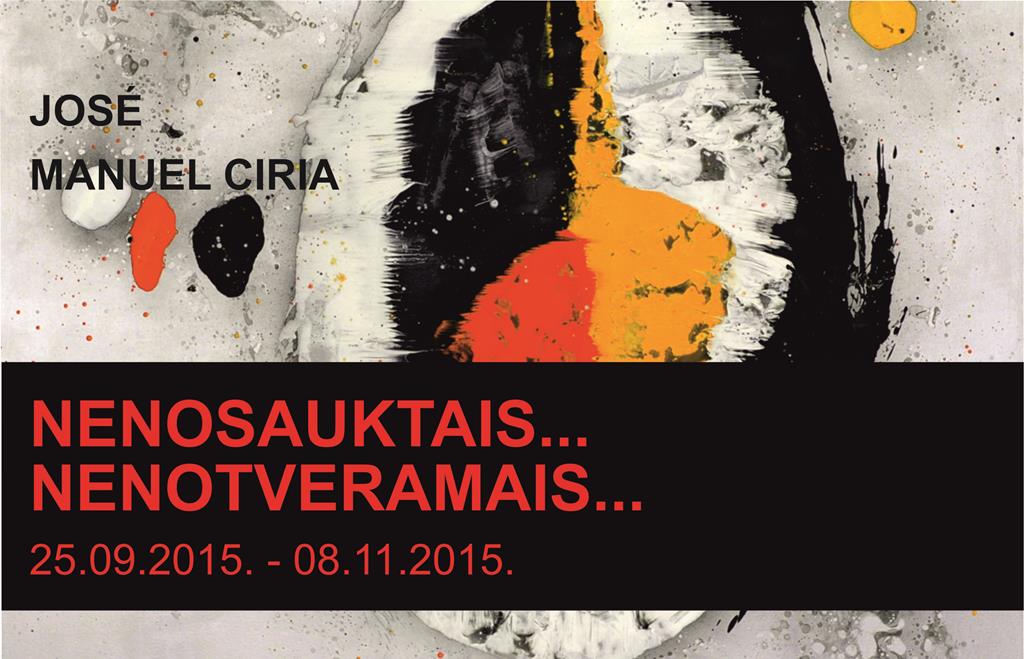 Before the Title, Beyond the Surface

I decided to write this text about José Manuel Ciria as the words flashed back to me from memories. As the ideas emerged. In a kind of verbal abstract expressionism. It is totally surreal, because this has nothing to do with his work or the unconscious, nor unconsciousness. Expressing it in legal terms, as it were.

I am sitting in front of a window from which all I can see is the sea. A vast monochrome sea. Dark, with subtle, veiny white crests. There is no land to be seen. The sky is a soft blue and white. This sequential repetition is actually a perfect abstract exercise, however real it may appear at a glance or to superficial interpretation. I am thinking about paintings by José Manuel Ciria, and his Before the Title, Beyond the Surface exhibition. I can find no references to his colour ranges that appear to spring from the bowels of the Earth rather than from the depths of the sea. Reds, blacks, earthy tones, like volcanic rocks. Despite this, I can imagine his pictures floating on the surface. Not adrift, simply lending intensity to the monotonous horizon. I would link this imaginary sequence with one of his painting installations where the pictures were scattered on the cold walls of a museum, in the Abstract Memory series, to be precise. Memory is as abstract as the environment that surrounds me. That is why my visual relationships are as abstract as his pictures.

I cannot say that I know everything about pictures by José Manuel Ciria, but I have known about them for a long time. Neither can I say that I know everything about talks given by José Manuel Ciria and his internal discourses, but I do know about many of his concerns mentioned in long interviews and private conversations. Painting and just painting. I cannot say that my knowledge is complete, and less so since I have only once read some of the catalogue texts that he wrote for his exhibition at the Tabacalera rooms in Madrid. Surprising flashbacks. I have come to the conclusion that he should indeed write catalogue texts himself. Simply delightful in intensity. A slap for the sceptics of painting, and therefore, of his work too. Why should we, let alone others, describe him? Simply because he asks us to translate his paintings into phrases and concepts. He trusts in our words. I trust more in his words. I just try to give them a further twist in the context of the artistic reality of our time. José Manuel Ciria is largely a single-handed sailor, and who am I to throw him a line as his paintings sail in front of my eyes.

After dedicating many years to explaining, arguing and communicating contemporary art, I have not often come across artists that have the gift of words: be it spoken or written. All through the history of art, there have been first class artists who, despite their supreme ranking, have had their texts more highly valued than their work, although this theory arose in the closed world of the experts. Be not surprised you outsiders, but Dalí was one of those cases. There are those who have even said that he was a much better writer than a painter. I have to agree, but the avida dollars has always rewarded artists more than writers. José Manuel Ciria is a good writer, but he is first and foremost a tremendous painter. His word power is scintillating. His painting is scintillating too. Simply sparkling and dazzling the view. With spots of paint.

For more than two decades, I have shared every day of my life with paintings by José Manuel Ciria. And with his engravings too. They are works from the time when he still had not left Madrid. He had yet to begin his international journey in search of transformations, of a market, readings and interpretations. Despite changes in his luggage, everything Cirian is hidden in his bags. Nobody can hold a candle to him. His first stopover was New York. New York is José Manuel Ciria´s city. I dare say for the passionate, if not the sentimental. New York is no painting by Hopper. It is not a Warhol image. Although many who subscribe to that view would say so. New York is flesh and blood of abstract expressionism. New York is a split and cracked paint. It is an old, but not a tired city. Speaking of old, José Manuel Ciria´s painting has these same essences, but it is neither tired nor spent. It is street painting that gathers together the remnants of a city where the walls and sides of buildings –where better to find a canvas–  are a view to see the shreds of advertising billboards, painted and repainted with graffiti and the desire to cover urban wounds. A city in perpetual construction, as is Ciria´s painting. This is where new languages begin to be incorporated into his work. From videos to the objectual.

After that came Berlin. And then London, the city where he now lives. However, Madrid is a city which he always comes back to. He told me once that, to his frustration, in New York he painted like he did in Madrid. And also the other way about, that in Madrid he painted as if he were in New York. His inspiration or his muse took the flight in the opposite direction whenever they pleased. Until the schedules changed. This, in the end, has not been a problem, the artist´s vital and existential journeys ended up together, crossing one another, coming and going like underground currents. If one had to place Ciria´s painting in a particular tradition, the most obvious would be abstract expressionism, but that would only be for a small part. His works gush with paint as if each of his paintings were sprouting from reinvented history. When the art world splits into groups, for or against painting (for or against the conceptual) he took the middle ground, albeit not equidistant. As to José Manuel Ciria, he would have liked to have peed in Duchamp´s urinal, marking territory between his third and fourth generation court of third or fourth rate acolytes. No one pees on José Manuel Ciria´s territory, owing to the conceptual, there is nothing to be gained. He has learned the hackneyed tricks of the conceptual, but he knows that there can be no tricks in painting. Given the easy or the difficult route, he kept to the latter although the revenues were lower and more complicated. More complicated, but it would be others who would play or toy with that.

Words cannot hide what is in the end just a gimmicky word game. A game of cups, passing ideas from one beaker to another, trying to lose the spectator´s gaze and interest. This is what much art has become over the last few decades. The good thing about José Manuel Ciria is that there is not much to explain, although we could explain many things, if we were to look below the layers of paint.

He left New York to go to Berlin. For personal reasons rather than the necessity to change the cycle, although the cycle did change. Such is the law of life. The map of art history is marked by different capitals. They say that the capital of our time is Berlin, as was once Paris or New York. In the desolate streets of this city of the fallen wall, was born its fame to host any artist who yearned to launch the success or fashionability of his career into orbit. José Manuel Ciria´s soul froze over. Berlin had little to offer to him, and he had little to offer to a city which, personally, I find quite eerie. With the wall through the middle, or without the wall. However anti-modern or against the grain it may seem, Ciria turned his back on Berlin. There is not much to be ripped from the scars torn into the asphalt. And what a conducive place it could have been for intense painting by Ciria, due to the wound that opened with the death of his father, who he always referred to as his most faithful companion. I met him in Madrid. He was always at his side and it could not have been easy sitting beside his artist son. His work, after his father´s death, began to fit into one head, but the heads multiplied like removal boxes in an interminable house move. Faces and gestures appear, among the torn-apart and the monstrous. Internal and external ghosts. Exploring the disease of creation and the creator, of origin and death. Pictures like ultrasound images of the soul.

His future is like a mountain of boxes. The artist on the move with all in tow. One box, then another, and another. Who will be the lucky one who gets to unpack it all? The material and the immaterial. Each box guards a secret, a reality and a surprise. Since that time, his pictures have been filled with boxes. Just like his studios, and his life circumstances. In this exhibition, Ciria unpacks a good many of his obsessions under the mantle of the title Before the Title, Beyond the Surface. Although the name clearly suggests conceptual layers, his painting is pure creative anxiety, but not emptiness. Experimentation with the pictorial concept, with the soul, with essence. The scene set with the white cube represents the walls of the museum, which will radiate fire, as if the volcanic activity of this place has jumped to life again at the surface. The constructivism of the architecture is the constructivism with which Ciria also experiments in his work. Ciria has come to a time in which he has made friends with Malevich.

The Mark Rothko Centre is illuminated from within by the light of these paintings done in flashes of inspiration and life. From within, to the exterior. From the traditional, to the avant garde. From the concept of expressive intensity. Construction and destruction, to reborn. 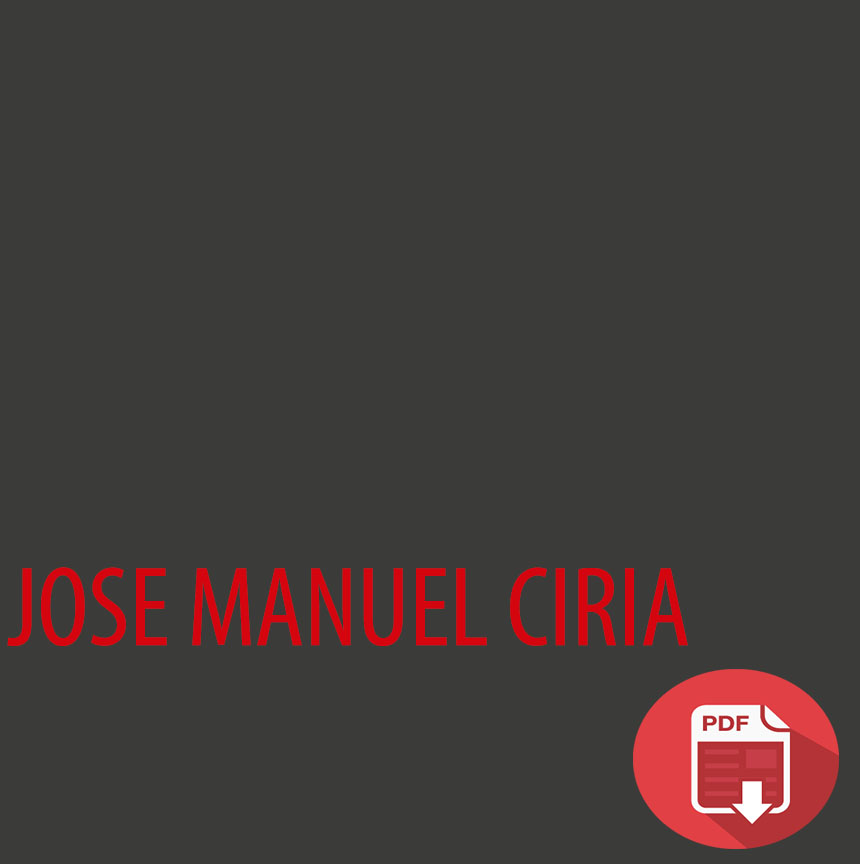