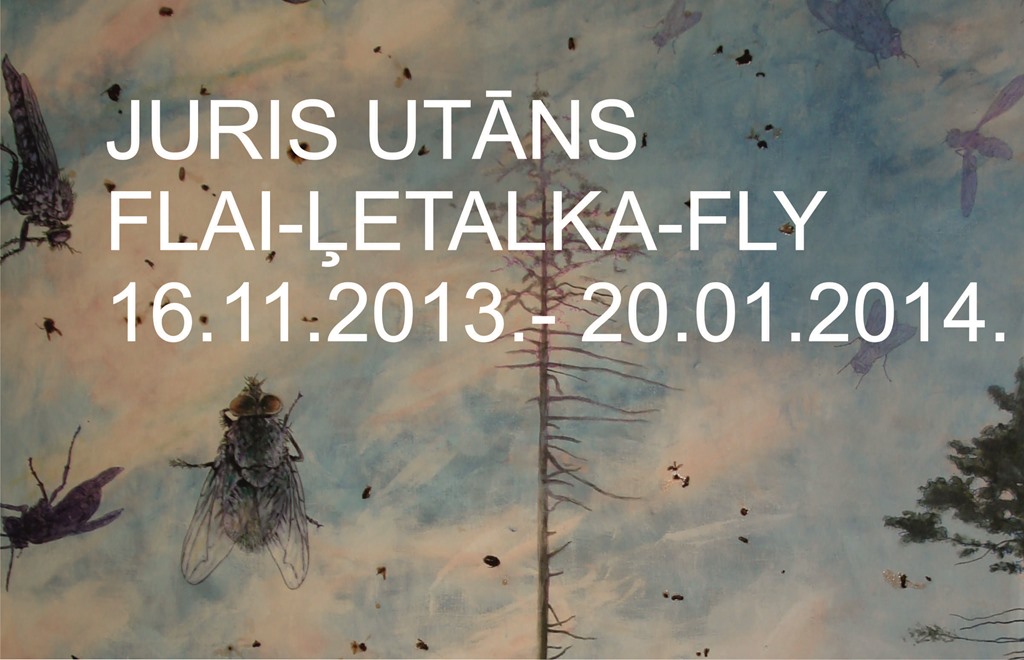 The title of the exhibition of works by painter Juris Utāns – “Flai – Letalka – Fly” conveys a message at several levels. First of all, the title is a pun – a play on English-Russian words in a Latvian vernacular, which in the globalization era are used in the manner of international communication and are dedicated to Utāns’ favourite image – a fly, which is a permanent “lyrical hero” of his works. Second, the title has a symbolic content, as the author considers that: “…we all are able to fly, the essence is the same, only our souls and minds are limited and suspicious”. Third, the intonation of the title precisely reflects Juris Utāns’ philosophy of life perception – to tease the society with a flippant intonation, which does not lay any responsibility.

Juris Urtāns’ 1  art has always been aimed at making his contemporaries leave the comfort zone. Perhaps, reasons for this are to be looked for in his personality trait, since his aspiration for this has not decreased in the course of time. As a student of the Art Academy of Latvia, Utāns was an active painter who participated in exhibitions and soon won popularity and recognition. This was the time of socialism, when life was controlled by the Soviet ideology, and all the absurd and contradictory things could be described only in allegories and subtexts, since criticizing the Soviet system was dangerous. The content of art works has always been important for Utāns, however the attention devoted to the formal quality of paintings has not been less significant  – in Art Academy Utāns studied with outstanding lecturers, who have achieved fame as classics of Latvian art already in their lifetime – with Indulis Zariņš, Boriss Bērziņš, Eduards Kalniņš a.o. Utāns has always been socially active in his art; in Soviet times it was characterized by a system of definite images which the leaders of Soviet life employed as a propaganda tool, however, even at the time when Utāns was painting scenes with factory workers, his interest in Hieronymus Bosch and metaphysics was obvious. “The contrasts between industrial elements and naivety of nature which Utāns likes to depict provide a battle arena for dream-awakened monsters: for personifications of war, murders, mythical danger,” critic Pēteris Bankovskis once wrote 2.

During the period, when the changes in the social order were tooking place and Latvia became an independent country, the conditions of life fundamentally changed. This affected the situation of artists as well, and in the result, the thematic painting by Utāns, which has previously been recognized and received state commissions, was no longer topical, and he almost stopped participating in the exhibitions. However, situations brought about by life, where the falsity of ideals and doubtful ethics of deeds began to provide a rich material for thought, re-established Utāns’ status as a provocateur, and new works were created again, revealing his talent as a master of grotesque and irony to a full extent. Confrontation at an ideological level was replaced by personality degradations and private compromise climaxes, whose depiction makes people   feel uncomfortable, grimace with dislike and shake it off.

Juris Utāns’ art is characterized by surreal situations and moods. But at the same time we see in them much of what is around us. To stimulate viewers’ perception, the artists puts the irrational layer of consciousness into motion, which intensifies the situation that would encourage people to look at what is going around without “rose-colored spectacles” and notice “what is striking” in the surrounding reality.

The exposition includes works created in 2012 – 2013, intended for the solo exhibition “Utāns Paints and Wins!” held in Latvian National Art Museum, 2012, as well as works created specifically for the exhibition at Daugavpils Mark Rothko Art Centre.

1 Juris Utāns has graduated from Janis Rozentāls Riga Art Secondary School (1977) and from Art Academy, Painting Department (1984); has continued his studies at the USSR Art Academy with Eduards Kalniņš and Boriss Bērziņš (1987 – 1990). Since 1987 he is a lecturer of the Department of Psychology of Pedagogy and Art at the University of Latvia.