LOCATION/ DISLOCATION. BETWEEN REMEMBERING AND FORGETTING 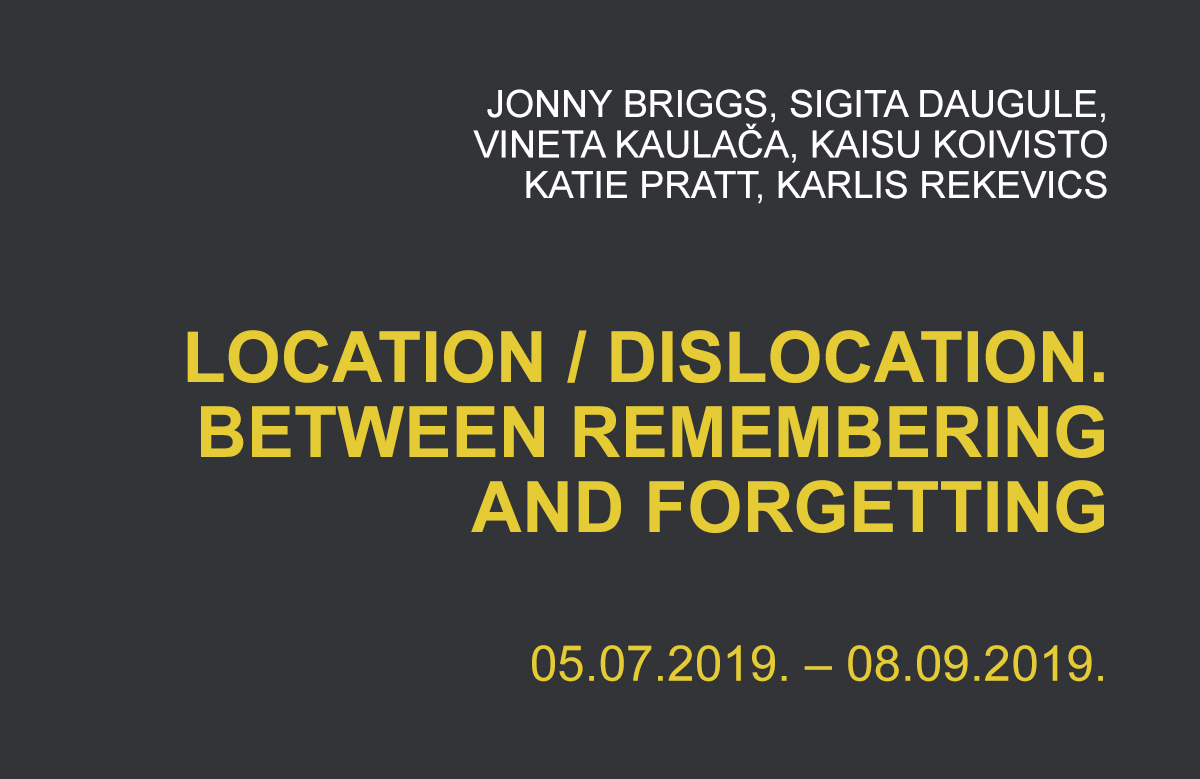 The exhibition looks at time and space as well as memory and the principles of organising space as a field of investigation. Here, space, relates not only to geographic size, but also includes psychological, cultural and social contexts. Finding themselves in perpetual motion, people form their relationships and determine their trajectory of movement with close attention to the spatial conditions. Whereas the perception of space in fact varies according to the place from which it is viewed; experience, social and cultural context, perspective and countless other factors.

Memory shapes space. With the help of memory, what you have just seen overlaps with what you saw the moment before creating depth to the visible. The necessity to see and observe is related to an alertness to sensations and to being aware of the experiential. Memory forms a relationship with the flow of time, the space of thought amid the emerging and the past, and an individual sense of time. When does the passing moment become present, experienced? And the ever-changing, constant? What is the force that makes one return to a situation, an image, a word? Describing the power of the gaze in a photographic image, Barthes highlights the punctum, a spontaneous and simultaneous unity with experience, “However lightning-like it may be, the punctum has, more or less potentially, a power of expansion. This power is often metonymic”.[1]

The complexity of visual language as well as the diversity of approaches are demonstrated by the range of these exhibiting artists, working in a variety of media: drawing, painting, photography, sculpture as well as site-specific installation.

The idea of movement in space and the presence of different contexts is woven into the very curatorial principle of this exhibition, presenting artists from Finland, UK, USA and Latvia in the exhibition “Location/ Dislocation. Between Remembering and Forgetting” at Daugavpils Mark Rothko Art Centre.

Jonny Briggs (London, UK) examines photography as a medium and its capacity to convey different frameworks of time and space. In order to create the Spotlight series, Briggs photographed areas of the Jersey Police Headquarters in low pixilation, printed them, cut them out as circles, and hung them back where they had been originally photographed. This references the iconography of police censorship, and although the images may appear to be as if spotlights, helping a person to see, they are in fact masks that obscure what is behind them. Two time frames, spaces and ways of seeing are juxtaposed within the same single image.

The question of what is real or not, what is a truth and what is a lie, has been deliberated within these actual spaces of the Police Headquarters and within photography itself. There is suspicion and doubt in photography — if something is even remotely strange about an image, we readily assume it to be digitally manipulated, constantly provoking us to suspend our disbelief.

Sigita Daugule (Rīga, Latvia) Daugule’s imagery refers to the urban environment. The process accumulates layers of paint, modelling medium, coats of varnish and pigment on the surface of the canvas. Her paintings reveal brand new qualities of the inner space of painting that evocatively contradicts the initial motives for creating that could have been found on the streets. Daugule’s work conveys something deeply personal and fragile, challenging this imagery that derives from a public space. Her paintings could be perceived as small pieces of reality that tend to expand their borders outside the surface of the canvas. Curator and Art Critic, Inga Šteimane, Art Director of Art Station Dubulti (Riga, Latvia) writes about Daugule’s work:  “Linkage to nature in paintings is usually signified by the horizon. The paintings which are featured in ‘Facades and Structures’ are cultural landscapes in a sense, but the artist makes do without a horizon. That means that the discourse of realism does not immediately capture her art. At the same time, abstract art is a fairly insistent explainer of Daugule’s paintings from the very beginning.  Eventually it must be concluded that ‘Facades and Structures’ can be viewed from both historical perspectives — as the environment when transcribed by the artist, or as an abstractly composed painting.”

Vineta Kaulača (Riga, Latvia) Kaulača’s work examines the relationship between the transient and the perpetual through the language of painting, choosing situations that bring to a halt – or on the contrary accelerate movement. Her investigation applies to both time and space: these dimensions are themselves invisible but can be determined by the perception of movement, changes and distance in the surroundings. Through the painting process, the substance of paint generates a material response and transformation in that which is intangible: a gaze. Without trying to attain perfection from a glance and whilst leaving space for interpretation and reference – a snapshot and the reason why it was made. With the help of memory, the reproduced event has created an entirely new place, a so-far non-existent space of consciousness, although coordinates can identify it on a map of space and time. Kaulača attempts to capture a delicate in-between state; a liminal situation between remembering and oblivion, indicating the impossibility of repeating an experience twice — that permits the sensation of continuity, the nature of time which is pointed towards the future.

Kaisu Koivisto (Helsinki, Finland) Kovisto’s works are created at the intersection of historical, personal and poetic elements associated with various kinds of environments. Koivisto uses travel as one of the strategies for creating her work. Kaisu Koivisto states: “I consciously seek out places that I assume to be significant for me and will serve the purposes of making art, seeking and finding. I photograph cultural landscapes, the culture of landscapes. I photograph and draw above all at bases left behind by the Soviet army in former areas of the Soviet Union or within its sphere of influence, for example in the Baltic countries, Belarus and the former East Germany.”

Koivisto’s journeys and wanderings in specific geographical locations are transformed into an almost surreal experience in her photographs, drawings and sculptures. Koivisto writes, “Elsewhere” – the excursion to the unknown is like the making of art: reaching out to something that is still emerging but will gradually achieve content and form.”

Katie Pratt (London, UK) Pratt’s abstract paintings could be perceived as a site of thinking and making as well traces of journeys made during the painting process. They progress in complexity and challenge the limits of visual language. Pratt’s paintings convey interactions between different systems by imposing a rationale on uncontrolled paint application. The starting point for Pratt’s paintings is gesture: “the ground is applied liberally — dashed at the canvas. Next, the painted ground is surveyed with forensic scrutiny to identify any regularities, patterns and trends in the brush-marks and the splashes of paint. These uniformities are organised and systematically categorised.”

“These paintings reflect how humans organise, socially and politically. Clustering occurs quite naturally in the works, contemplating the exchange between individuals and the community. The use of rules reflect the dilemmas of societal regulation and the limits of implementation of the law: there is inevitably friction between regulation and freedom as well as limits to the jurisdiction of each clause”, writes Pratt.

Karlis Rekevics (New York, USA) refers to the urban architectural structures that he transforms into spatial sculptural objects and large-scale charcoal drawings. Rekevics is engaged in a dialogue with the built environment. Here he creates site-specific work during the residency at Daugavpils Mark Rothko Art Centre. The work will be consistent with his practice, creating site-specific architecturally sensitive forms that are based on the local manmade environment as the starting point. As the New York-based, independent curator and art critic, Karen Wilkin, states in Sculpture Magazine, “Rekevics’ generously-scaled, weirdly architectural cast plaster constructions are robust, aggressive and materially expressive sculptures. They are also evocative and elusive. For all their size, their evident mass and weight, and their rough material palette, Rekevics’ haunting structures refuel to rely solely on the unignorable fact of their considerable presence or to yield to a single reading. Somehow, they conjure up a wealth of often contradictory but enriching associations. With their idiosyncratic metal superstructures and glowing incandescent bulbs, they suggest the unlovlier parts of the urban environment — expediently built, unconsidered, usually peripheral, often decaying elements of the city — which we habitually encounter but almost never register. Yet these references are simply Rekevics’ starting point. His real subject is the way memory transforms perception. His sculptures are rooted in real experience, but it is experience tempered by recollection… changed, fragmented, conflated, and reordered, before being translated into an intensely physical metaphorical language. The architectural allusions of Rekevics’ work notwithstanding, he plays fast and loose with rational spatial and structural relationships, altering scale and defeating logical expectations.”