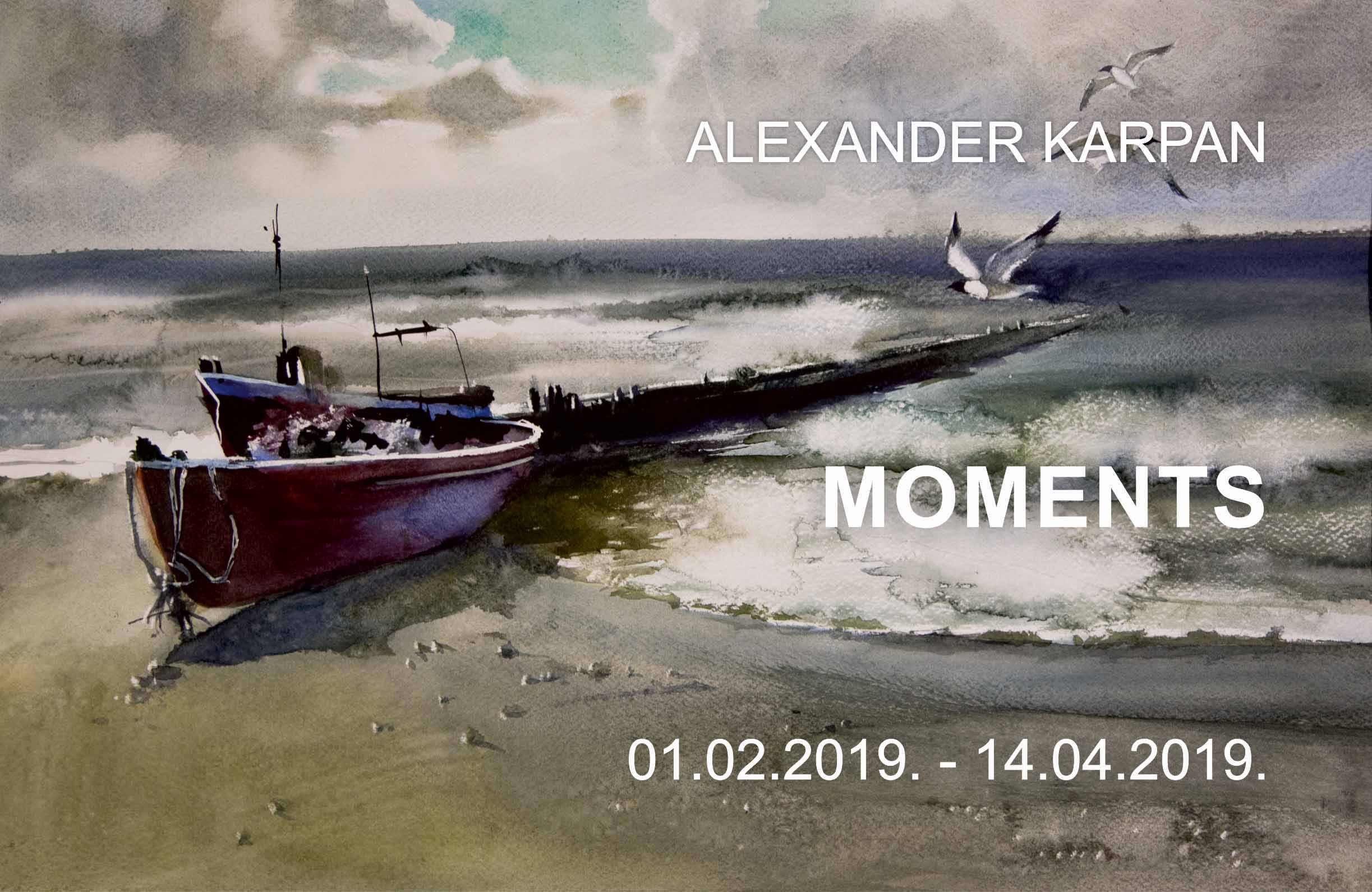 This exhibition is a remarkably vibrant kaleidoscope of moments frozen in time, happy and unrepeatable bursts of creative output by an brilliant master of watercolour painting. Embodied in exquisitely charming and professionally executed works, these moments allow touching a truly unique phenomenon in the history of Vitebsk watercolour school. Exaggerations aside, Alexander Karpan (1953-2016) is its great success and pride, one of the most talented Belarusian watercolour painters of the late 20th – early 21st century. And the artist’s body of work is a wonderful case in point to this argument.

Alexander Karpan was born on 6 November 1953 in Starokonstantinov, Ukraine. In 1979, he graduated from the Faculty of Painting and Printmaking in Vitebsk Kirov Pedagogical Institute where he studied under I. Stolyarov and A. Memus, celebrated masters of printmaking and watercolour.

1979 through 2014, Alexander Karpan taught drawing, painting and composition at the Faculty of Painting and Printmaking at the Vitebsk Masherov State University. He was one of the most respected art educators of the time, a true professional in his field of expertise. In 1991, he joined the Artists’ Union of Belarus. Traineeship at Moscow Lenin State University under K. Maksimov and N. Rostovcev and at Saint Petersburg Academy of Arts under D. Volkova and M. Gerasimov had a major influence on Karpan’s creativity.

As an artist, Alexander Karpan developed in the early 1980s, having chosen the principles of realist figurative painting and a sense of harmony as his primary goalposts. It seems that he never strove to borrow an alien manner of painting, was always genuine and, at the same time, deeply respectful of the most diverse artistic styles and experiments. Despite a very serious attitude to art, he painted his watercolours with surprising ease. It seemed as if he managed fully to understand and tame the uncontrollable forces of one of the trickiest painting techniques. Karpan was equally talented in different genres, although he preferred still life, landscape and portrait. Among the hallmarks of the artist’s work are its depth of imagery, great technical mastery and, certainly, a uniquely individual stylistic approach.

Since 1979, Alexander Karpan was an active participant in regional, national, Soviet Union and international exhibitions as well as international and national plein airs that were dedicated to distinguished Belarusian artists, authors, poets and humanitarians (Khrutsky, Zaryanko, Drozdovich, Sikore, Bykov, Borodulin, etc.). During the last 20 years of his life, Karpan received the highest praise and distinction from professionals and the viewership at major international watercolour plein airs in Kaunas (Lithuania), Shenzhen (China), Saint Petersburg and Petrozavodsk (Russia), Vitebsk and Polotsk (Belarus). The artist held a number of master classes in Vitebsk and Minsk, at Daugavpils Mark Rothko Art Centre, Latvia and online. In his many years of teaching at the Department of Fine Arts, Alexander Karpan trained large numbers of students, many of whom have become brilliant creators, widely known in Belarus and beyond.

Karpan’s creative outputs were distinguished by a certificate of merit from the Ministry of Culture of the Republic of Belarus and multiple notes of commendation from the Artists’ Union of Belarus. On several occasions, he became the laureate or co-winner of international juried exhibitions of watercolour painting. The artist was awarded the anniversary medal of Saint Petersburg’s Society of Watercolour Painters. Among Karpan’s latest achievements are the prize of Liepāja City Council (Latvia) for his contribution to the international plein air “Marine Painting in Liepāja 2016” literally a month before his sudden demise.

Doctoral candidate in theory of art, member of the Artists’ Union of Belarus
docent at the Department of Fine Arts in Vitebsk Masherov State University
curator of the exhibition