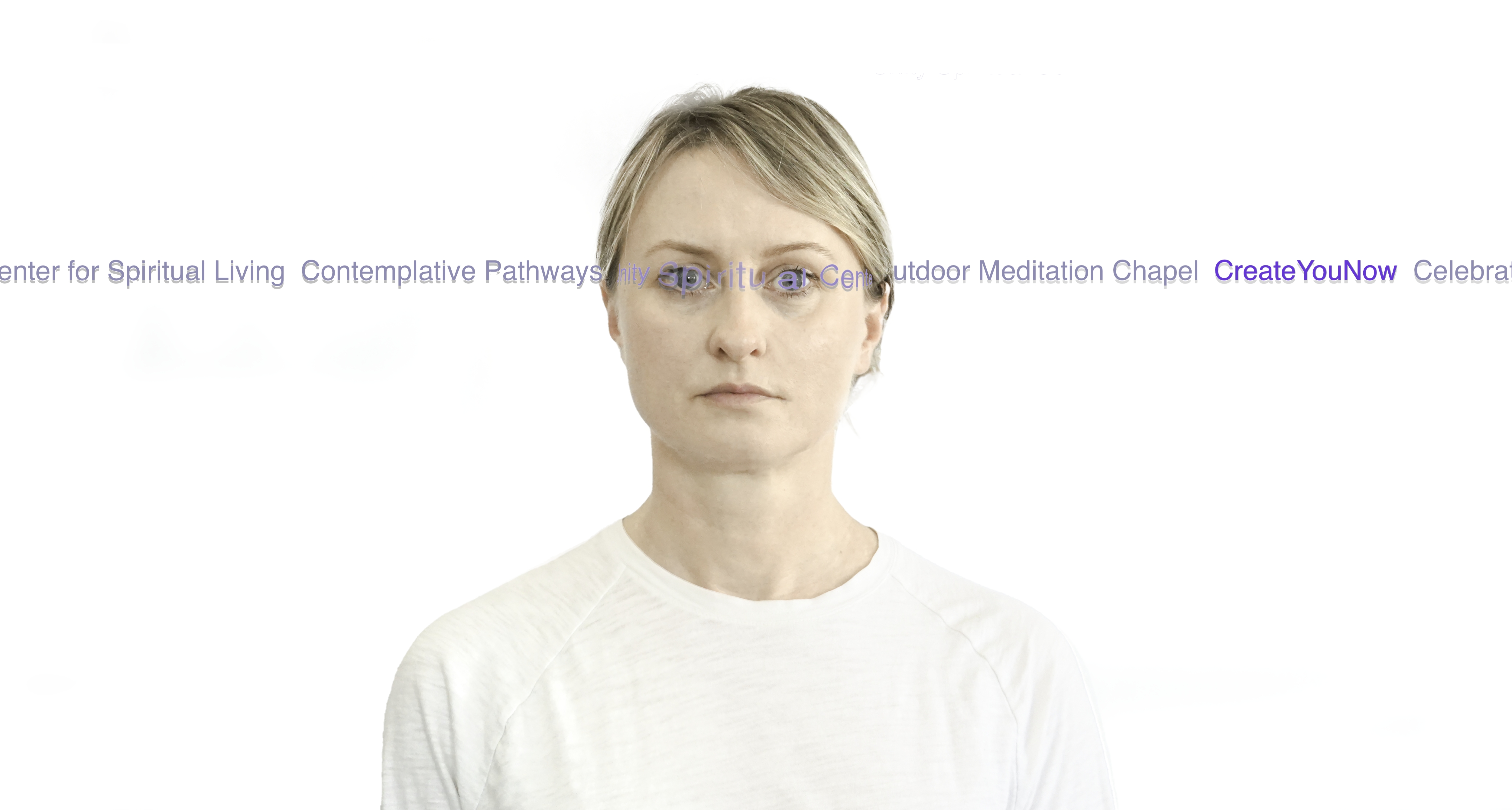 The exhibition refers to the phenomenon of New Spirituality and the sociocultural trends we have been observing since at least the 1990s. Sociologists recognise the “New Spirituality” as a distinct phenomenon of our times, steeped in the religious and esoteric traditions of both the Eastern and Western worlds and resonant with new ways of living and philosophical thinking about the reality that always emerge in times of religious crises.

The “New Spirituality” pursues the experience of the sacred, sometimes understood as something personal and intimate and referring to the power residing within. This perspective on spirituality emphasises the role of sensations and psycho-spiritual exercises. It treats the human body as filled with inner, spiritual meaning and a manifestation of the creative power of the spirit.

The movement includes esoteric searches across a vast spectrum, from astrology to occultism, and even some content from Asian and pre-Christian religions. The worldview of the people seeking new forms of spirituality is largely syncretic. Above all, people want to get help in specific – usually difficult – life situations, expand their consciousness, and go beyond the tedious and meaningless day-to-day. Many rely on new forms of spirituality to find meaning in their lives. Various meditation centres and other groups and individuals offer miraculous healings, personal and spiritual development workshops, coaching, videos on spirituality, relaxation and meditation music, et cetera.

What has caused the popularity of these various forms? Certainly, ours is “an era of colossal dislocations in employment and family budgets, an era of political polarisation and disappearance of the community under the influence of social media. So people naturally crave the bonds and meanings these various programmes so generously promise.”[1]

Katarzyna Krzykawska studied the situation in San Francisco, where only thirty-five per cent of the population identifies with one of the world’s major religions. At the same time, the place has over a thousand different spiritual groups, communities, associations and collectives, most of which have arisen in the last fifty years. The artist visited the sites, and the result will be seen in her video.

The “New Spirituality” expresses itself in various forms of broadly defined art and emphasises gender equality. It is considered holistic and “democratic” in the sense that it embraces the whole person and is accessible to everyone. It is also supposed to guarantee the well-being of someone seeking alternative paths, unlike the ones embraced by consumer society, and expresses great respect for nature.

The works selected for the exhibition relate to various topics around the New Spirituality movement, showing the broad spectrum of this phenomenon. It ranges from searching for new religious or philosophical systems through ecology and returning to nature to alternative ways of living and thinking about the world. Some works were created expressly for this show.

Five artists – Paweł Dudko, Małgorzata Niedzielko, Justyna Sołomianko, Iza Tarasewicz and Katarzyna Zabłocka – come from Podlasie, a land of spectacular natural beauty and a distinctly multicultural region where various religions continue to play an important role in people’s lives and provide absorbing topics for artists to reflect on in their work.

Paweł Dudko has created a virtual “Totem”. The name refers to the idea of a revered deity, a protector, a virtue, or a belief. The author believes it can represent anything, from the closest of kin – family, friends and loved ones – to material values, wealth, career, and purely abstract virtues, spirits or deities.

Iza Tarasewicz’s sculpture “Boom” can also be described as a totem or a magical figure of some idol and a storehouse of energy. The golden colour scheme may refer to the Byzantine idea of eternity and light cast by faith. But the artist primarily creates works to oppose the global forces of capitalism sucking the power out of people. The artist also expresses concern about the state of our planet.

The world of forms, sculptures and installations created by Małgorzata Niedzielko is, to some extent, a personal reflection on her self-image. She sees nature as a world of great richness and mystery but also a world in mortal danger. For this exhibition, she has chosen a piece called “Anhedonia”, a term used in psychology and psychiatry. It means a reduced ability to feel pleasure and joy. In this state, we lose the joy of life and fall into apathy, which wraps us in indifference. The condition may be aggravated by a personal tragedy or even simply by the change of seasons, like the autumn die-off in the garden, but also by social and political moods, climate change and other impactful external conditions beyond our control.

Katarzyna Zabłocka lives two hundred meters from the Polish-Belarusian border, where a refugee drama has been playing out for more than a year. People fleeing violence, poverty, persecution, and even death are being tormented by Belarusian and Polish border guards. The author has heard the cries of adult men and seen the suffering of women and children. As a dedication to their situation, Zabłocka made artworks from herbs and grasses she collected in a no-access border zone. The gathering enabled her to document and monitor what was going on. She talks about cruelty through beautiful images woven from nature. Zabłocka’s works also express bitterness and a sense of disappointment. The collage she’s called “Dormition” externalises her resentment towards God and Mary, whom she accuses of falling asleep and failing to see what is happening.[2]

Ida Karkoszka is a Warsaw-based sculptor whose art is about the human relationship with the world. She refers to social issues, ecological problems and animal rights. Her sculpture “This Will Be Our Secret” alludes to the problem of paedophilia in the Church.

Paweł Nowak has repeatedly referred to human existence and the spiritual world in his creative practice. His other theme is his personal story, wherein he devotes much of his work to his family. For this exhibition, he created a triptych composed of once beautiful petals of dead flowers, a brain sculpture and some drawings. The blue colour symbolises spiritual life.

Jacek Jagielski’s works, to quote from the artist, “refer to individual human attitudes, outlooks and behaviours. (…). They draw attention to our sense of independence and freedom, including freedom of thought and the choices we make.” The artist creates magical objects, often in a state of unstable equilibrium, as his personal commentary on physical and philosophical phenomena.

Ryszard Ługowski has been interested in Buddhism, Zen philosophy and the music of Buddhist monks since the start of his creative career in the 1980s. Gong concerts have been a regular part of his creative activities for several years. His work relies on contemplation, meditation and profound reflection on the state of the world today. The latest installation called “Stable Instability 2022” and shown at the Mark Rothko Art Centre continues his recent reflections as he looks for parallels in the laws of physics, cosmological laws and the general laws of existence on the one hand and the situations occurring in interpersonal and social relationships on the other. Broadly speaking, he explores the relationship between humans and the Universe.

Daniel Koniusz’s sound installation can be understood on many levels. First of all, as a story about an unknown yet perceived danger. This subtle threat is difficult to discern directly. It is like a magic eye following us and having the power to influence our fate and physicality. This seemingly harmless situation of infrasound action is meant to refer symbolically and physically to the tools of oppression and weapons used not only by the police and other services against citizens (to suppress demonstrations, etc.) but also in modern wars.

Nicolas Grospierre travelled to Daugavpils in October 2012 to photograph the town where Mark Rothko was born and which he left in 1910 at the age of ten, never to return. He created “Daugavpils/Dvinsk/Dyneburg/Borisoglebsk” – four photo objects in an experimental technique already shown at the Mark Rothko exhibition in the National Museum in Warsaw in 2013. The viewer sees a photograph in a Plexiglas box, but there is no single vantage point from which one can actually distinguish what the pictures represent. The artist created an experience for the viewer to accept this absence of visibility. This way, the author tried to express the divide that separated Rothko from his birthplace.

The New Spirituality project attempts to bring you a handful of ideas and artworks and encourage your own reflections on this phenomenon.

[2] I used the text by Kaja Kojder

MORE ABOUT THE ARTISTS AND THE ARTWORKS