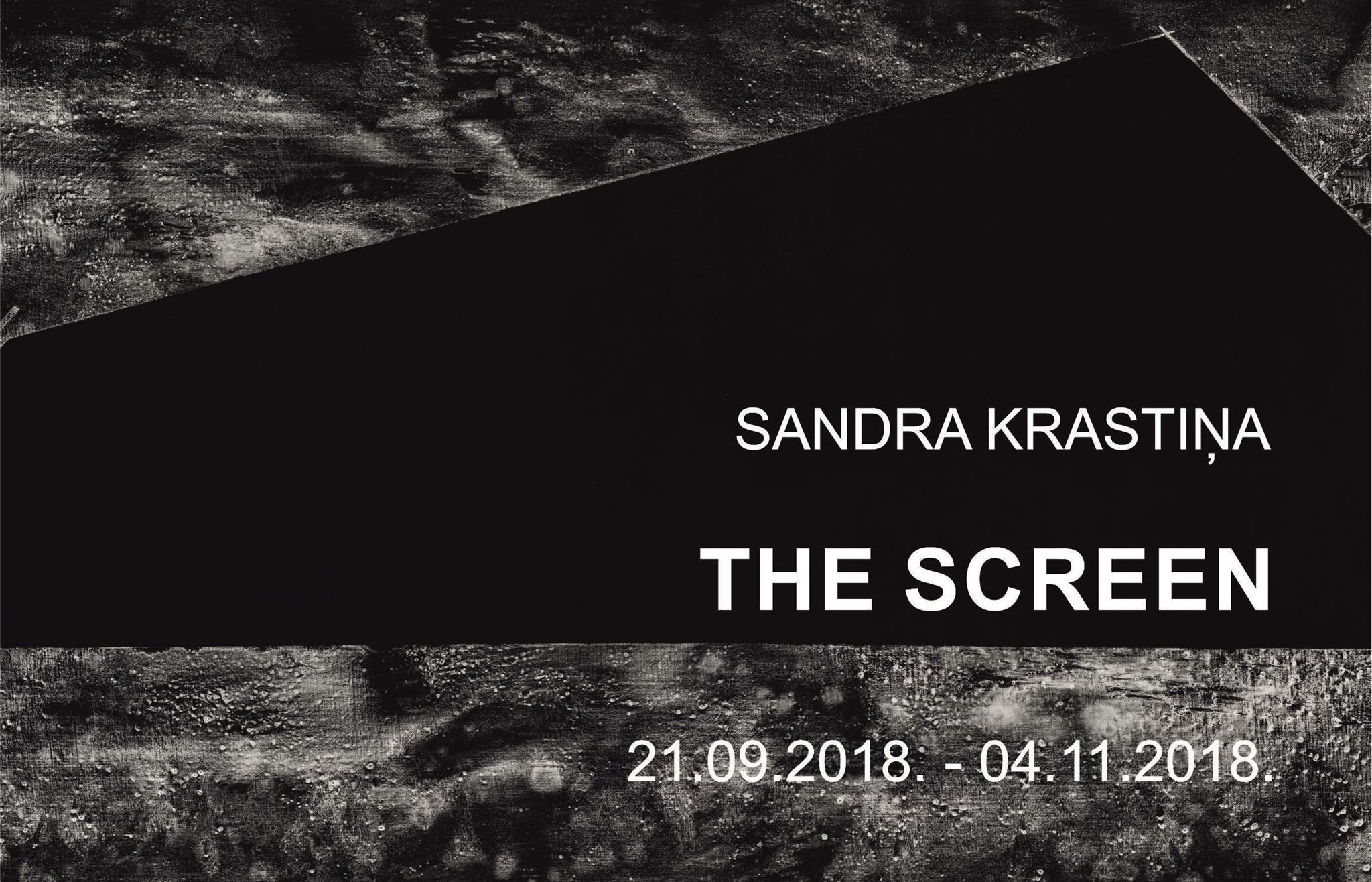 Ever since the Renaissance, painters have used the optical phenomenon of camera obscura – the magical power of a beam of light to conjure up on a rectangular screen of white fabric or paper a reversed and inverted yet precise representation of a primary form – a fragment of reality either observed in nature or deliberately staged. A uniformly lighted image or text on a computer screen gives the impression of a neutral, objective message. Conversely, in a painting we see details of an event, highlighted or left in the shadows by the artist, an author’s version of a narrative, interpretations emotionally coloured by the artist’s personality.

Sandra Krastiņa’s solo exhibition Screen at Daugavpils Mark Rothko Art Centre includes artwork from her major exhibition projects of the past couple of years. Key to this body of work is the artists’ reflection on time, memory, power and heroes. Fluid time that erodes historical memory, accelerated time that fragments perception of the here and now, the flow of time that drags things to the surface or sinks them into oblivion.

Large-scale cycles of paintings with nominal labels “shirts” and “bulls” (exhibited in 2016 in the solo exhibition Civilians at the Arsenāls Exhibition Hall of the Latvian National Museum of Art) analyse the anatomy of power. Anonymous power is visualised in a line of white shirts. An opaque, bluish green colour scheme, achieved through a special technique of gradually washing out the pigment of oil with turpentine, and the identical formats of the paintings reinforce the impersonal, universal nature of power. Each painting is customised – the shirt designs and the gestures of their invisible owners are never repeated. The phenomenon of power transforms personhood into anonymous mass. This topic could have easily become a moralising lesson, but Sandra Krastiņa’s artistic arsenal features tricks that allow approaching such grand themes without slipping into didactics. The ambiguous and metaphorical nature of her paintings and a special point of view make ordinary things appear different on the screen of the artist’s imagination, enabling us to see the symbolic meaning of a shirt, which could just as well have been the subject of a beautiful still life.

Embodiment of a different kind of power – a primal, destructive, aggressive physical force – is the bull, which nonetheless submits to human will. The painting, inspired by a documentary photo taken by Kārlis Lakše in the 1938 National Accomplishments Exhibition in Koknese, brings to mind a localised version of the myth about the abduction of Europa. In other large-scale canvasses, broadly and expressively painted on the floor in the alla prima technique, one can read the idea of a beef cutting chart. Similarly, a fluorescent yellow number tag in the ear of a raging animal can be read as a hint that big is by no means invincible.

Symbolic signs of a masculine power in the messages of both cycles allow viewing them in the context of feminism, which is traceable in the large-scale figural compositions of Sandra Krastiņa, member of the legendary Gentle Oscillations group, from the 1980s. Her feminism is not based on theories or slogans. The unchanging cycles of life, the gender differences encoded in nature, and social conventions are sufficient basis for formulation of her beliefs.

Constant information flow backed by new media and new technologies changes our perception of time and its continuity. Duration of the legitimacy of the hero-of-the-day status, positive and negative connotations of the term hero, dissolving in the kaleidoscope of daily news – these issues are the focus of Sandra Krastiņa’s attention and research in the #herooftheday project (2017 solo exhibition at Latvian Academy of Culture’s Eduards Smiļģis Theatre Museum).

The title of the exhibition is an ironic reference to the popular section of the Diena newspaper and, more broadly, to the technologies used by the fourth estate – the press – to build hero status. Preparatory part of the project documents this fictitious process – from a staged photo session (photographer – Jānis Deinats, actor – Vilis Daudziņš) to a pseudo publication in an imaginary glossy magazine. By participating in this mutually beneficial process, the press and the hero achieve their goal, and the hero accepts the rules of play, submitting to certain manipulations. Wide, expressive, impetuous brushstrokes in black-and-white paintings that imitate the visual stylistics of glossy magazines underline the hero’s psychological dissonance and reflect the frenzied pace of time.

Ambiguous nature of events, deceptive resemblance of objects, formal compatibility of rituals in antipodal situations and potential transformations of events into their antitheses are ever-present elements in Sandra Krastiņa’s art. Impulse for the Mirage project (2018 solo exhibition at the NOASS art centre), which continues the hero’s theme through a different narrative, comes from documentary photos dating from 1915, which capture mountains of flowers brought by people waving off newly drafted soldiers and exude a sense of imminent tragedy, a chilling foreboding of the inevitability of fate.

Overglaze painting on white, glossy tiles brings to mind an ancient superexposed or solarised photo, while the faint outline of a huge, dried aster in the foreground resembles a bomb explosion or festive fireworks. Behind the flanking pattern of visually distancing geometric tiles, a mirage-like image of a young man, locked as if in a time capsule, acquires features of timeless generalisation.

The most recent work I don’t know what I don’t know is the artist’s research project with an open coding system. The title of the monumental painting comprised of five panels reflects the reality faced by the author when she began her study of life in the former Abrene County, which no longer belongs to Latvia. Mysterious and unexplored as the enigma of the white women’s folk costume of Abrene County. Questions without answers and dearth of records in archives and museum collections motivated a search for documented testimonies in Balvi, Viļaka and Baltinava. One of the finds was a school photo album from Jaunlatgale County dating from 1937. The dark grey of a school blackboard in the tumultuous background of the painting, the chalked in names and teachers’ portraits, the massive, solid black silhouette of a schoolhouse – as a metaphor of a lost time. Historical memory and time, global turbulences, fluid borders, loss of balance, geopolitics and lives of actual people.