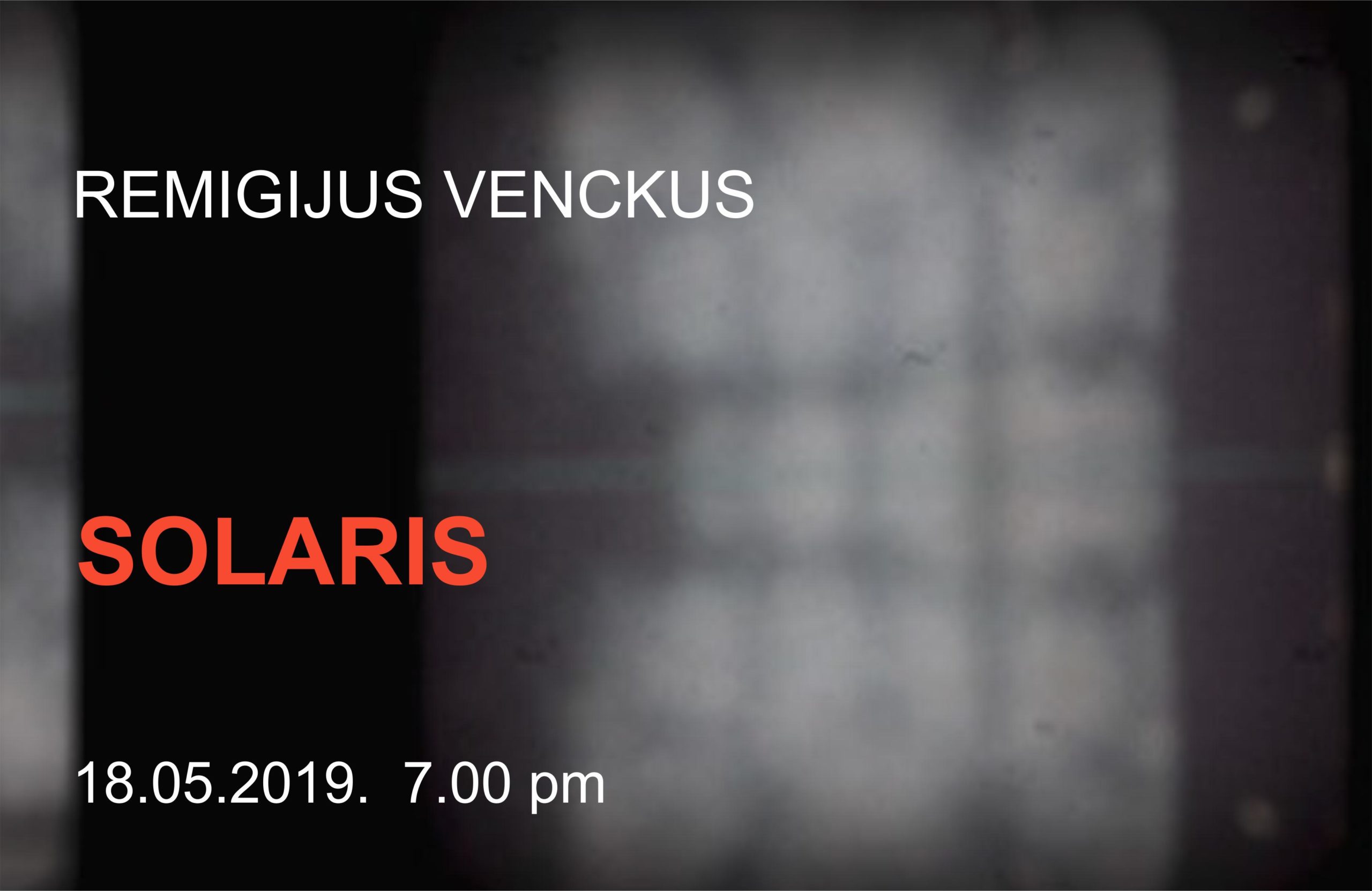 Exhibition: 18.05.2019 ‘Solaris’ is an art exhibition of a well-known Lithuanian media artist Prof. Ph. D. Remigijus Venckus. The exhibition will be opened at 7 p.m. at Daugavpils Mark Rothko Art Centre.

Idea: On the Solaris Ocean. Lately I have not had much time for reading fiction, but I am actually missing the period of bookworming, which happened in my life some years ago. Thus, in the summer of 2017, I went back to my already forgotten reading activities. I spent half of my vacation near some Lithuanian lakes with a few interesting books, having nothing to do in my academic life. While there, I read ‘Solaris’ (1961), one of the most memorable Sci-Fi books ever written. The author of this impressive masterpiece was Stanislaw Lem, Polish intellectual and philosopher, winner of multiple international awards. I had never read anything by him before, but I had seen some films based on his books.

Page after page, I read all the sentences very attentively and was greatly fascinated by the contents. Lem’s story raised some new rhetorical questions in my mind: I kept asking myself about the strong logics in the story and carefully delivered explanations of the mystical unexplored planet of Solaris.

Even now, I am fascinated by the author’s idea that Solaris is an intellectual ocean, which can react to any human thought, wish or dream. Thus, in Lem’s imaginary universe, any intellectual creature could provoke the planet to make copies of its real or imagined previous life or relationships; even those that never existed or would never be possible in a future world. The creatures’ wishes, ideas and unfulfilled dreams could sometimes limit the genesis of the planet. Thus, Solaris became a self-copying system in which curious people could be attracted and scared at the same time by these new and previously unseen forms.

At the end of the book, in its conclusion, Lem provokes us to think about our extraordinary and expanded loneliness under the sun, with humans always wanting to colonise new planets, lives and civilisations. Thus, people are disclosed as small, narrow-minded and involved in terrorist actions because of their paltry personal egos. In all our lives, we are so busy that we cannot see those logical factors; we are still searching for someone who could be pronounced guilty for our loneliness and unhappiness.

‘Solaris’ has impressed me so much that I have started creating a new photo-cycle, dedicated to Lem’s magnificent Sci-Fi idea. From time to time, I have been walking with my photo camera, taking images of strange and odd architectural details, combining different shots into new structures to cherish a new impressive cycle, which could intuitively express my feelings about loneliness, a loneliness already copied and distorted in many different photos of a new non-existing reality. Who knows, maybe this new reality is my never ever objectively evaluated existence…

My thoughts on the ‘Solaris’ discourse are not new, I have been thinking this way since my teenage years when I started creating experimental and then unsuccessful images. More than 15 years later, I began to analyse these images attentively and found a new understanding that those weird and once unsuccessful overexposed shots were not so bad and deserved some attention. Thus, the old shots continue to provoke me to think about visuality and its meaning for the future prospects. Those images have been getting me back into the labyrinth of my past memories, feelings, smells and tactile experiences.

From time to time, photography opens up to me as the surface of former time-space experiences, like the intelligent ‘Solaris’, which enabled me to immerse myself into my forbidden and never more exciting (un)real reality. Thus, I have been attacked with rhetorical questions without clear answers: what is my time and space, my way of life, directions in my creation, am I real or is my environment artificially copied by someone who is more intelligent than any creatures in the world, etc.?

However, the (un)ending questions make me stronger and more solid in my approaches towards images, which continue to bombard me with questions about the feelings I already had in the past and am still getting now, appreciating my expectations, connections with the surroundings, my day-to-day interactions with relatives and co-workers from the art or academic field. My photos affect me in the same way Lem’s ‘Solaris’ does: while watching and analysing my images, I continuously read myself as a never ending database…

The question is what ‘Solaris’ actually is, and for me it seems to be an intangible mathematical formula, like the ephemeral jazz, which leads me into unlimited improvisation; it is much like automatic writing delivered and distributed by surrealists in the 20th century. Still, I keep turning back to the past age, where the great philosophers, artists and scientists were searching for their own and universal ‘Solaris’. I still have a romantic desire to find the true ‘Solaris’ and to understand my role in the intelligent ocean of (non)existing phenomena… Maybe I could come back to the beginning of any beginnings, to non-verbal God’s language where everything is understandable in any (un)known dimension, where, so far, I never had a chance to truly find myself…

About the artist. Prof. Dr. Remigijus Venckus is an art critic and media artist. In 2014, he defended his Ph.D. thesis in the Humanities, “Jacques Derrida’s Deconstruction Theory in Video Art Analysis”, at Vilnius Academy of Arts.

Venckus holds a professorship at Vilnius Gediminas Technical University, Faculty of Fundamental Sciences, Department of Graphics Systems. He is the author of 18 scientific articles, 5 research reports presented in international scientific conferences abroad and 20 research reports published in scientific conferences in Lithuania. Previously he has worked as Associate Professor at Vytautas Magnus University and led the Creative Society and Economy Institute at Kazimieras Simonavičius University; he has also taught at Vilnius University, Šiauliai University and Vilnius Academy of Arts.

In Lithuania, Venckus is known as an art critic engaged in reviewing contemporary art exhibitions and writing about painting, photography and video art. His critical reviews on well-known Lithuanian and Western artists make an integral part of exhibitions held not only in Lithuania but also in the USA, Denmark, Poland, Russia, Latvia, etc. Venckus is the author of 258 critical articles on art and culture.