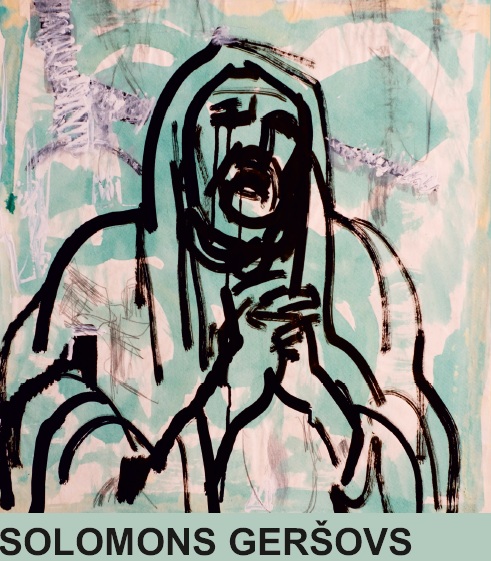 Three towns – Daugavpils, Vitebsk and Leningrad – have been especially important in Solomon Gershov’s life. He was born in 1906, Daugavpils (then Dvinsk) and spent there the first four years of his life. In Vitebsk, he spent his childhood and much of his youth. He started drawing early. For five-six years he studied with Y.Pen and received also a good academic education. He had worked together with K.Malevich and his pupils, however their ideas of suprematism and “approval of new art” did not appeal to him. But he willingly went to do sketches together with M.Chagall, admired his works, his artistic freedom and always remembered (later also followed) a simple piece of advice: “Don’t look at others, do your own!” At the age of 16, in 1922, he arrived in Petrograd (since 1924 called Leningrad). There he studied at Artists Support school, worked as a curator in halls of the Winter Palace, organized solo exhibitions, defended his views on painting among Filonov’s pupils, kept friends with D.Shostakovich, I.Sollertinsky, E.Garin, B.Erbstein, V.Dimitriyev and V.Kostrovtsky, mixed with the artists from “Krug” (The Circle) and tried hard to understand K.Malevich’s ideas. But he understood something else: the main thing in art is imagery, internal content and emotions, because if these qualities are missing, the formal quest and external effects do not attract spectators. Almost no S.Gershov’s works from this period have survived – only a few drawings and two children books with his illustrations. In 1932, he left Leningrad and in a good and creative company – with artists B.Erbstein and Y.Safonov, poets D.Harm and A.Vedensky – went into his first exile to Kursk. Later he lived in Moscow, during the war worked in Siberia, but since 1948 spent eight years in Vorkut deportation camp. But he survived. And he continued to draw – many portraits of prisoners drawn in the camp have been preserved. In 1956 he returned to Leningrad. During the period of final thirty years of his life – from 1956 to 1989 – S.Gershov created a lot of paintings and graphic works executed in his individual manner and most frequently in his unique mixed technique: tempera, gouache, water-color, ink on paper, cardboard, wall-papers, foil, newspapers… Exhibitions of his art works were organized in Leningrad, but especially often in Georgia, and since 1965 also in foreign countries – England and the USA, where he was considered to be a follower of M.Chagall’s and H.Sutin’s ideas. In the 60s of the 20th century, A.Edner, artist from Leningrad, called S.Gershov a master of improvisation style in painting, drawing on the experience of his culture.

Good drawing school had always underlain the “improvisation”, “spontaneity” of S.Gershov’s works – he had been taught by Y.Pen, A.Eberling and by the end of 1930s by R.Falk: “Painting is the right color in the right place. But the right place is what is usually regarded as a drawing”. He was drawing and painting … everything! Landscapes of Vitebsk, Leningrad, Pskov, Georgia, Latvia and Estonia, all places he had been to; various still lives; portraits of musicians, artists, composer, ballet dancers and scientists. Some of them he knew personally (D.Shostakovich, P.Filonov, M.Chagall) others – he “knew” in his imagination (Michelangelo, Beethoven, Mozart, Rembrandt). He painted compositions dedicated to the Great Patriotic War, and he had been shocked by the tragedy in Spitak; there are also a lot of variations on dance and music themes, on ancient Russian painting and plots of Jewish festivities after motifs in stories by Sholom-Aleichem, I.-L.Pertza, I.Babel. Even a dull television program could inspire the artist to create an expressive image. However, most often he was inspired by music. One of the most interesting works by S.Gershov was the cycle “On D.Shostakovich’s Seventh Symphony”, which had surprised the composer himself (seven works of this cycle are in the collection of the family of D.Shostakovich). S.Gershov – “expressionist”. His art is a “scenery of a shattered soul” and a “cry of a soul” (as one of his later works has been named). “To soar up to the sky and cry out to the whole world about its strangeness and imperfection” – is what the artist should be engaged in according to S.Gershov’s opinion. A heightened perception of the world, subjectivity and emotionality of perception deform objects and space, generate tension in colors, cause vibrations of brush strokes and lines, create stabile composition. Being a cheerful and witty person, S.Gershov was endowed with “tragic feeling”, a characteristic feature of all great artists belonging to different periods, styles and trends, and manifested not only in the plots of their works but also in the properties of art language itself. He often painted “parting”, “seeing-off”, “funeral” – life as a road to death. It is not by coincidence that one of his principal art works – the cycle “Requiem” – was created after the death of his wife, V.Kostritzka, a ballet dancer and teacher. “All of us die, but the trace of human mind and talent remains for ever” – the artist wrote in his memories. Creative work means overpowering death, the end of human existence, it is a human’s escape from existential loneliness in this world. Therefore the main hero for S.Gershov is Artist, whose image is behind the different themes, plots and motifs of his works.

“The apotheosis of genius, by this the collapse of life is implied (and principally)” – this is how S.Gershov has been characterized by one of his youngest contemporaries A.Basin, artist belonging to the Leningrad non-conformist movement “chronicler”. In his opinion, S.Gershov embodied the same type of a creator as did Michelangelo, Rembrandt, Beethoven and Mozart. In S.Gershov’s case, “collapse of life” means that he was absolutely happy with a minimum of benefits of life and was not interested in social status and regalia. (Just to have the opportunity to work!). He was an “inconvenient” artist – an impudent, categorical singleton, whose attitude to creative work was very serious, without any irony as to a noble service and internal duty. All the rest was unimportant.