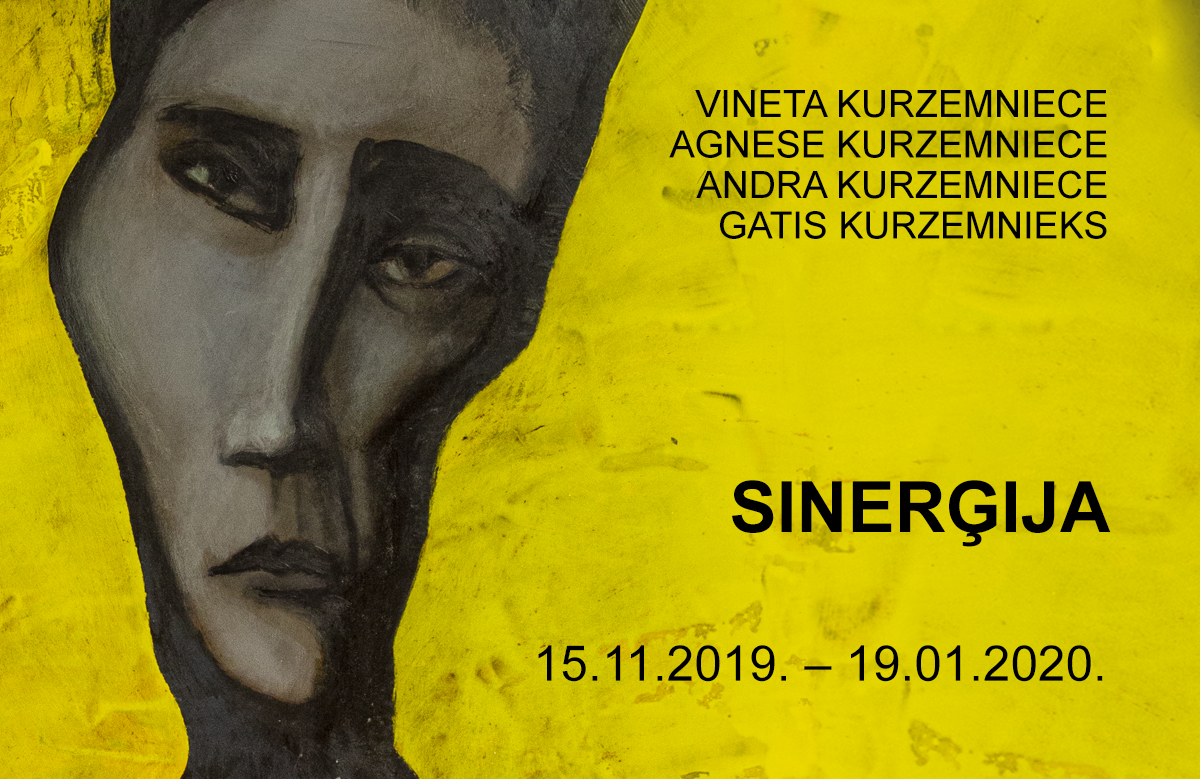 What is synergy? In simple words, the result is greater than the sum total of the contributions of the parties involved total. Mathematically, it might look like this: 2 + 2 = 5, and, of course, you can have any other value instead of 5. The result is higher than the sum total of individual parts. Synergy can combine and unlock the huge strength and potential that all humans have. The creative process is difficult to predict – it is hard to say how it might end or where it might lead. Nor is it possible to foresee all the new challenges one might have to face along the way.

The SYNERGY of our family is the proverbial shoulder, mutual support and tending of our creative spirit. Experiencing life through all our senses and from different viewpoints, and combining it all in one great, joint worldview, with each family member working in their own artistic discipline.

This is not the first time the four members of the Kurzemnieki family, notably, woodcarver Vineta Kurzemniece, her two daughters (graphic artist Agnese Kurzemniece, textile artist Andra Kurzemniece) and son Gatis Kurzemnieks with his video installations have exhibited together in one joint exhibition project. To date, the family exhibition series “TOGETHER” (Jūrmala City Museum, 2016; Art Gallery “Laipa” in Valmiera, 2016; Theatre House “Jūras vārti” in Ventspils, 2017) and the exhibition “Radu-Raksti” held by Museum LV and Grata JJ in 2018 gave the broadest opportunities to assess both the individual style of each artist and the family’s combined powers.

Vineta Kurzemniece studied sculpture at the Art Academy of Latvia (AAL) from 1971 to 1977. Although her first choice was granite, she later turned to woodcarving, which had attracted her in the past. She is a regular participant in both local and international exhibitions since 1977. In 1982, she was accepted into Latvian Artists’ Union. She also sits on the board of Latvian Sculpture Centre (founded in 1993).

The work of Vineta Kurzemniece radiates peace, harmony and love. Its central theme is an allegoric human figure, most often the rounded forms of a woman. As a rule, these are two-, less frequently three-figure compositions whose subjects are harmoniously entwined – their legs, arms and body outlines locked in an embrace or a dance, becoming one.

Family is a huge part of the artist’s life: she is a mother of five children, so she has often played with the theme of mother and child. In addition, she makes religion-inspired work, which, again, is an allegory rather than a representation of specific Biblical motives, because the artist is more concerned with the figurative message of relying on the presence of higher, divine powers.

Agnese Kurzemniece graduated from Janis Rozentāls Secondary School (1991) and chose to pursue higher education at the Graphics Department of the AAL. Her graduation project was made at the etching workshop of Professor Gunārs Krollis (1991-1998). In 2012, she trained at the Non-Toxic Intaglio Workshop in Spain under the tutelage of Henrik Bøegh. She is a member of the Chamber of Graphic Art (since 2012) and Latvian Artists’ Union (since 2016), and a regular participant in symposia and artist plein airs. In 2013, she had a solo exhibition, “Feminine Weaknesses”, in “Art Pegazs”, Rīga. In 2013, Agnese participated in the 2nd Latgale Graphic Art Symposium at Daugavpils Mark Rothko Art Centre. In 2018, her work was featured in the group exhibition “100 in Latvian Art”, also organised by the Rothko Centre.

Agnese works in a variety of techniques, including intaglio, silkscreening and lithography, drawing and painting as she looks for just the right way to implement her ideas. Lately, she uses her author’s technique to paint on plywood boards, creating art that is rich in religious and mythical characters and themes. These works are very deep and contain multiple layers of meaning.

Andra Kurzemniece graduated from Janis Rozentāls Secondary School and rejected the traditional pathway of painting. Instead, she joined the Textile Art Department of the AAL, which has led her to painting with fabric in her preferred technique of textile mosaic. Her compositions are assembled from patches of different fabrics, often adding beads and embroidery. To achieve the desired result, the artist, as if by glazing, stiches together multiple layers of thinner fabrics. Meanwhile, to add texture and ruffle the surface, the material gets deliberately crumpled and crinkled. Another hallmark of the artist’s work is the use of bright, contrasting and decorative colour fields.

The artist has been a member of the Textile Arts Association since 2000. She exhibits regularly, both in Latvia and internationally. Her exhibition record includes the miniature exhibition “Song to the River Daugava” in Daugavpils Mark Rothko Centre (2013). In 2014, she participated at the Rothko Centre’s first textile and fibre art symposium “Fortress Walls”.  In 2018, her work was on display at the group exhibition “100 in Latvian Art”, also organised by the Rothko Centre.

Gatis Kurzemnieks is a 3D and 2D artist, educated at the Visual Communications Department of the AAL. In addition, he has a prior master’s degree in computer science from the University of Latvia. He’s also trained at Hochschule Luzern, where he studied 3D animation. His field of interest is 3D animation, virtual reality and creative programming. Gatis Kurzemnieks’ 3D animations stand out with their convincing quality and persistently black humour.

Viewers are offered creative outputs of four different, yet inextricably connected authors. The exhibition shows how different fields of art (sculpture, textile, print and 3D art) can be used in today’s context, because we live in a time of confluence: a meeting point for past and future worlds of art. The roots, however, are one, and they are strong.