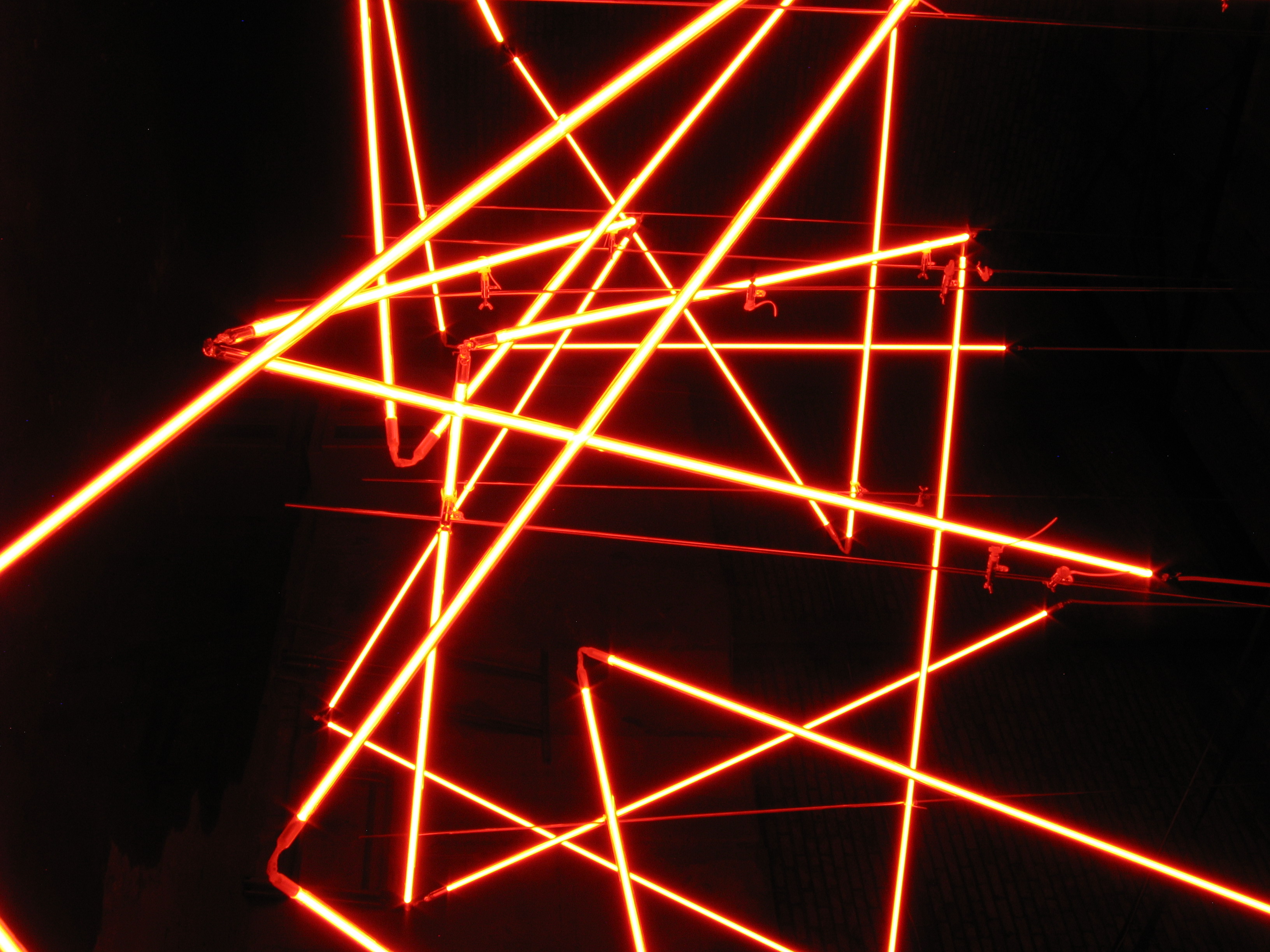 “The neon installation is the author’s statement on the matter of light and its potential in the building of spatial forms. According to the artist, in the case of the proposed concept, we are dealing with our physical feeling of space and the material properties of light as a phenomenon encountered not only with our sense of sight but as a whole-body experience.

Jarosław Perszko has been working with the particular material of neon light since 2014, studying its structure and emphasising the dynamics of the gas circulating in the glass tube. These dynamics became the motif for his new installation, “Titans Dancing”, where he refers to Greek mythology and touches on the binary nature of existence: “fragility and permanence, the will to survive and the inevitable passing away, (….).”[1]  The Titans were the first gods and belonged to a race of giants, but they lost the battle with Zeus and were cast down to Tartarus, the darkest part of the underworld. Referring to the Greek myth, the author offers a perverse commentary on the current political situation, expressing his hope and faith in humanity.

This is also another creation of the artist in the ephemeral matter of neon lamps, whose light organises the space in a very particular way. In Perszko’s previous project, “Untitled Door”, a free-standing object, visually just a drawing, became a symbolic passage, a transformation of the visitor’s experience of time and space. The “Step” created for the Orońsko Sculpture Park contained a symbol of infinity and became a modern statement against Orońsko’s traditional sculptures made of stone or metal. The red gas circulating in the pipes alluded to the casting processes going on in sculpture studios while also addressing the theme of permanence and ephemerality. His other projects include the “Cold Bathroom Radiator” and the “Sun of Sopot” – a site-specific neon sign making humorous allusions to the Polish holiday Mecca. Its shape suggests a typical resort landscape – a circle of the sun setting behind the horizon, reflected on the surface of the sea. In spring 2022, Jarosław Perszko exhibited at the Orangery Gallery in Orońsko a neon installation called “Three Graces”. The luminous spatial drawing of climbing forms was a direct predecessor for the work prepared for the Mark Rothko Art Centre in Daugavpils.

Instead of traditional permanent materials such as stone, wood or metal, the sculptor experiments with ephemeral neon lights. The matter of his art, dynamically circulating in the tubes, resembles pulsating blood and is associated with life and creative drive – an important factor in the artist’s creativity for many years. Perszko juxtaposes classical titles from Greek mythology with industrial lamps and accompanying components, prompting viewers to reflect on universal issues through contemporary methods.”

Curator of the exhibition Eulalia Domanowska

Jarosław Perszko (1962) studied at the Faculty of Fine Arts of the Nicolaus Copernicus University in Toruń, Poland, graduating in 1989 from the sculpture studio of Professor Hanna Brzuszkiewicz with an honours degree. In 1989–1990, he stayed at the faculty’s Sculpture Department as a teaching assistant to Professor Adolf Ryszka. Perszko joined the teaching staff of the Białystok University of Technology (BUT), Faculty of Architecture, in 1997 and led its Interior Design Department between 2007 and 2017. He was BUT rector for students’ affairs in 2016–2020 before assuming a director’s post at the Faculty of Architecture, Institute of Art. A long-term professor of fine arts, he teaches sculpture, modelling and architectural space creation to interior design students. He also teaches puppetry technology students at the Białystok Puppetry Art Department, Aleksander Zelwerowicz National Academy of Dramatic Art in Warsaw. Perszko is the initiator, co-founder and chairman (2000–2011) of the international Artists in Nature association. Top on the list of his residency experiences is the Alliages 2002 international symposium in Champagnole, France. Perszko has initiated multiple cultural projects and co-organised numerous creative workshops, such as the Creative Education Laboratory at the Ujazdowski Castle Centre for Contemporary Art in Warsaw. He remains active in sculpture, installation, performance art and scenography for film, drama and puppet theatre.