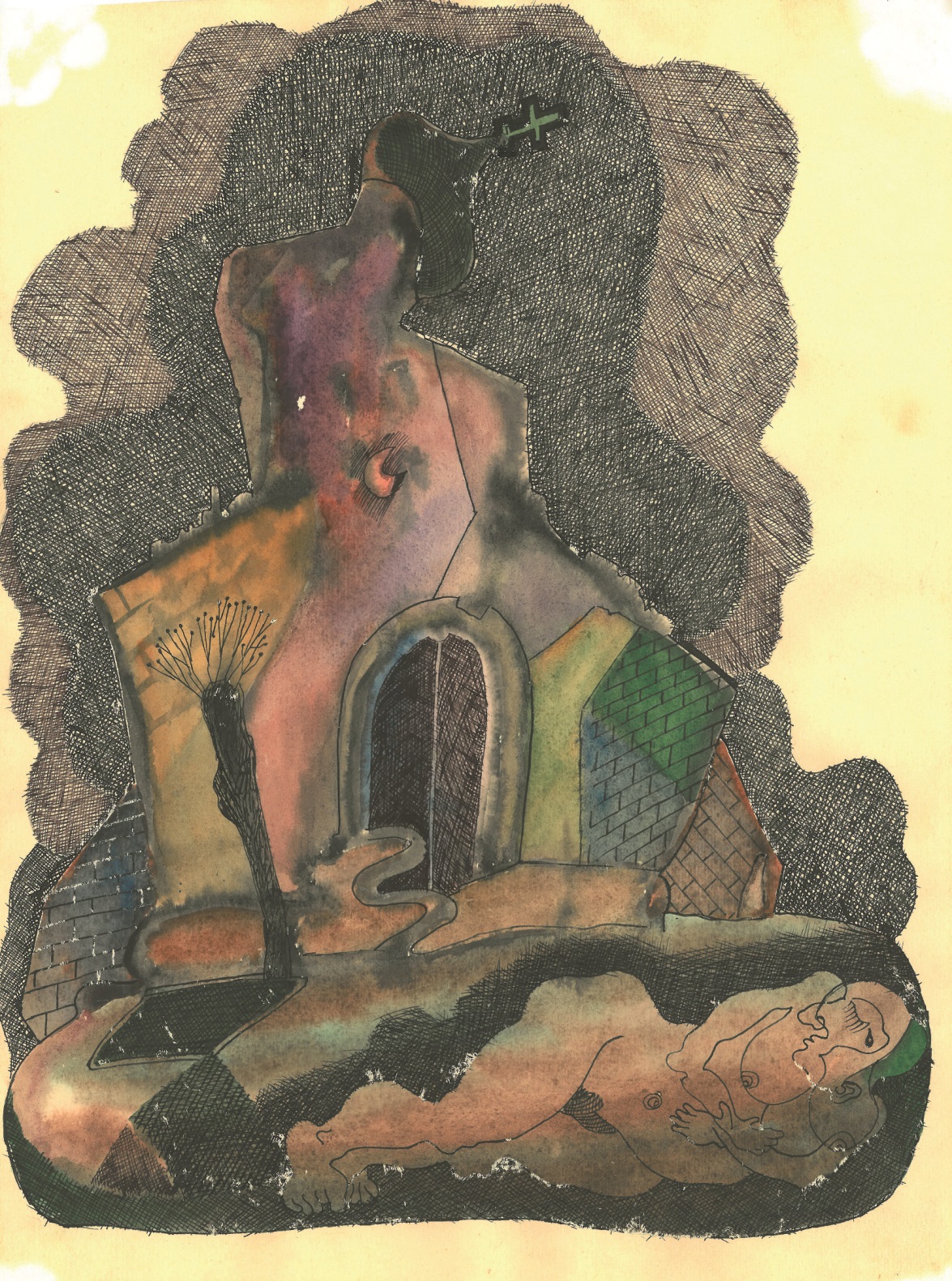 Nikolai Novikov was born on 27 August 1935. Nothing is known about his parents, except the artist’s patronymic, Yakovlevich, meaning that his father’s name was Yakov. In 1940, during the outbreak of WWII, he was taken to an orphanage in Kazan, Russia. The five-year-old Kolya (short for Nikolai) was growing up in a world racked by war. He left the orphanage in 1951 at sixteen and entered an industrial school in Nizhniy Novgorod, Russia, to study ship engineering. Until 1954, Nikolai supported himself with various part-time jobs in different cities across the USSR, ending up in Mykolaiv, Ukraine.

The adult Novikov was conscripted into the army and sent to Murmansk, Russia. Shortly into his service, he sustained an injury from a timber truck. After a necessary stay at the hospital, Novikov returned to Mykolaiv, Ukraine but did not settle there. Instead, he trained as a tractor driver and went to the virgin lands of Kazakhstan, then back to Ukraine to the city of Proletarsk in the Lugansk region, where he worked in a mine and later as a concrete operator in Kirovograd. In the meantime, Novikov developed an interest in drawing and decided to study in Odessa. In 1961, he applied to the Grekov Odessa Art School, only to be expelled the following year due to poor academic performance. The pattern continued for ten years – Novikov kept getting expelled, then being allowed to resume his studies. He went back to school four times.

Novikov had no permanent job and usually slept at his friends’ or on the street. In the USSR, homelessness was a crime, and Novikov went to jail for it four times. For him, the marginal lifestyle was a form of asceticism, an ideological existence outside the system, but creativity always came first.

In 1985, Novikov turned fifty. His artist friends decided to put him into a psychiatric hospital. There, Novikov could live and work in peace without fearing repeated arrests. The artist continued to hone his technique and experiment with different styles. Over time, he developed his own individual style: ink graphics featuring deformed female and male bodies and psychedelic faces of saints. Novikov focused on form and relied on a mixture of sacred and prison symbols: halos surrounded by barbed wires, warped churches, hermits and convicts – an uncanny iconography of the social ‘underworld’. His special technique was rubbing the ink with his finger, smearing sharp lines into plume-like trails.

Novikov’s art demonstrates a strong folkloric presence and awareness of ancient cultures and myths. One of its ritual hallmarks is the omnipresent female form: wide hips, milk-flowing breasts, and a face often pushed out of the frame. She is the original source of life – she The Mother, she The Earth, she the stone goddess and the modern icon. The woman became a symbol for the primal goddess, called to protect and inspire the artist’s works with spiritual pre‑Christian intensity. An angel, a lover or a goddess, but always female.

In the 1990s, Novikov was already a living legend. In 1991, the Odessa Literary Museum held his first solo exhibition. The next one – “The World of Kolya Novikov”, would follow in 1993 but would remain open for only two days. In 1996, Kolya passed away in a hospital from a typical ‘tramp disease’ – tuberculosis.

For many, Nikolai Novikov’s story is pure adventure novel material. A lonely genius rebel, a true legend of Odessa, and a symbol of his time, Nikolai Novikov lived in a world where the feelings of desperate love and complete rejection were fused into one. It took much effort to collect snippets of history and piece together stories to reveal the life of an artist with a difficult fate – one who lived in the absolute ‘underground’ and remained independent against all odds.

Kolya never dreamed of becoming a legendary street bum, he wanted to be an artist, and he became one, a free creative spirit with real transformational impacts on public consciousness.