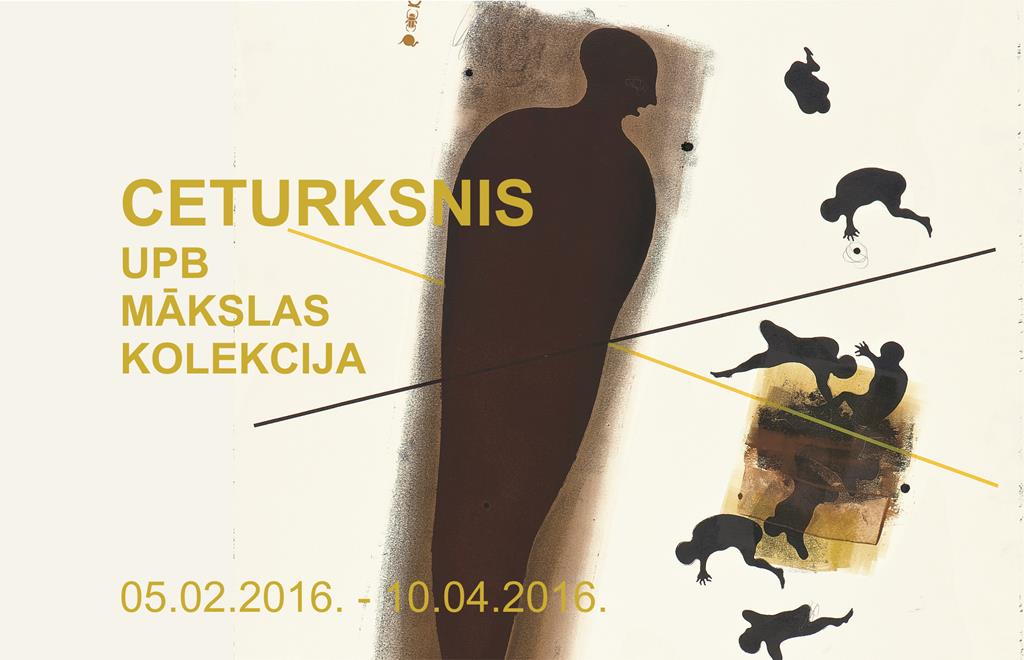 In 2016 UPB holding celebrates its 25th anniversary. It is a Quarter of Century.

The UPB art collection is a compilation of contemporary art that expresses the primary aspiration of giving a personal insight into the realm of artistic values which are developing in modern world. This collection started fourteen years ago, back in 2002, at the UPB office in Liepaja, when the first works were purchased. Uldis Pīlēns UPB Chairman of the Board reminds us in the introduction of the catalogue: “We’re not classic collectors who put together the collection on the basis of very precise, consciously developed principles, but the crucial component that forms this collection is emotions. This collection is chosen by our hearts, it reflects our perception of the world, our values, created by our contemporaries. How we line them up. It’s not always the largest tree in the forest that is the most beautiful one.”

Now it presents a significant contemporary art collection that consists of works of active artists from various generations. The exhibition and collection present an impressive variety of painters. Its core is a balance between two contrasting figures. We find work by master EDVARDS GRŪBE (1935), inspired by impulses of light and speaking with conviction of the omnipotent by the help of colour language with its capacity to convey the vividly expressive, as well as the sublime and the admired. His antagonist is the Fish created by EDGARS VĒRPE (1958) its mystery of peace and silence conjured up in closely similar tones, using a monochromatic, textured language of colour, despite which they are immensely diverse. The range of possibilities offered by the palette is tested by figuralists and by artists pursuing abstract themes. ZIGURDS POĻIKOVS (1955) seeks the equivalent of colourfulness in his landscape experience, while HELĒNA HEINRIHSONE (1948), with her passion for a challenge, triumphs in depicting the moods of existential experiences through laconic local colour.

Meanwhile, IVARS HEINRIHSONS (1945) offers a temperamental portrayal of a male pride and energy in his stark black and white outline of the horse as symbolic image. The asceticism of the black and white painting by IEVA MAURĪTE (1971) approaches abstract graphic art. Using variations of colour plasticity in similar tones and directional brushstroke patterns, INTA CELMIŅA (1946) strives to express the dual nature of the feminine world, the paradox of gentleness and remoteness. LAIMA BIKŠE (1970), similarly, tries to capture in her delicate paintings representation of the turn-of-the-millennium generation perspective. Through her vividly contrasting, luminescent spectral colours ILZE AVOTIŅA (1952) presents a different world that is centred on ferocious sorrow, but sheathed in apparently vivacious colour. Bright as enamel, the graphic-style, ornamental paintings by KRISTĪNE LUĪZE AVOTIŅA (1983) convey a wide geographical range of visual influences. GITA ŠMITE (1973), in contemplating her protagonists, does not avoid an encounter with herself. The grotesque aspect of the everyday woman’s world is contemplated, with an emphasis on rotund female forms by artist LĪGA ĶEMPE (1975) from Liepaja. The vital brutalism of the early work by AIJA ZARIŅA (1954) in this collection refreshes our memories of the breakthrough in Latvian painting of the 80s. In formal terms it resembles the bright works on silk cloth, saturated with feeling, by fashion designer and painter ELITA PATMALNIECE (1964). The artists of the 1980s New Figuralist generation are also represented in this exhibition, expressing the individual development of their personalities twenty years on. Engrossing as usual are FRANČESKA KIRKE’S (1953) intellectual games, inspired by the old masters, whereas the works of IEVA ILTNERE (1957) guide us in our tracks: in their exquisite texture and elegance, depicting the world of contemporary ideals of beauty, we may also perceive the voice of deadening loneliness. A sense of balance is introduced by DACE LIELĀ (1957) who holds to the unbreakable bond between humans and nature, grasping natural impulses even more sensitively. A canvas by ĢIRTS MUIŽNIEKS (1956) continues the revelation of the force of colour in painting, presented in a playful visionary world. ANDRIS VĪTOLIŅŠ (1975) likewise tries to transform his industrial world into orgies of colour. The conceptual supremacy of colour and line, celebrating the triumph of blue colour so beloved by the romantics, as a value in its own right, prevails in the work by SANDRA KRASTIŅA (1957). Continuing to explore the possibilities of monochromatic expression is BARBARA GAILE (1968), with abstract works revealing a new approach to the use of pigment and imparting significance to the texture of the painted surface as an element of the imagery. The creative handwriting by JĀNIS MITRĒVICS (1957) is represented by his work that once surprised us by showing new technological possibilities applied to a classic still-life format. The core of the collection consists of paintings, but it also features some unique graphic art: silk screens by ILMĀRS BLUMBERGS (1943), ideas brought to life using exquisite ink drawings by artist ANNA HEINRIHSONE (1970).  The ‘foundation’ of the collection was laid, appropriately enough, with the Mental Meteorites in stone by OJĀRS FELDBERGS (1947) who brought an upheaval in Latvian sculpture. LEONHARD LAPIN (1947) work is a manifestation of expressive minimalism.

EGILS ROZENBERGS’ (1948) monumental tapestries remind us of the significant role of this technique in the decorative application of the visual arts over the course of the century. This collection is a true contemporary creation that also includes photography. Painter NORMUNDS BRASLIŅŠ (1962) presents us with fascinating photographic observations of Venice in the power of water, KARLINA VITOLINA’S (1982) self-portrait series express a blend of timeless glamour and an architectural adventure set in the scenery of the Baltic coast, while the photograph Beer Planet, by the legendary son of Liepaja JĀNIS GRODUMS (1958–2010) enriches the collection with a flavour of the scenic water views of his native city.