Valdis Bušs What is the Truth? 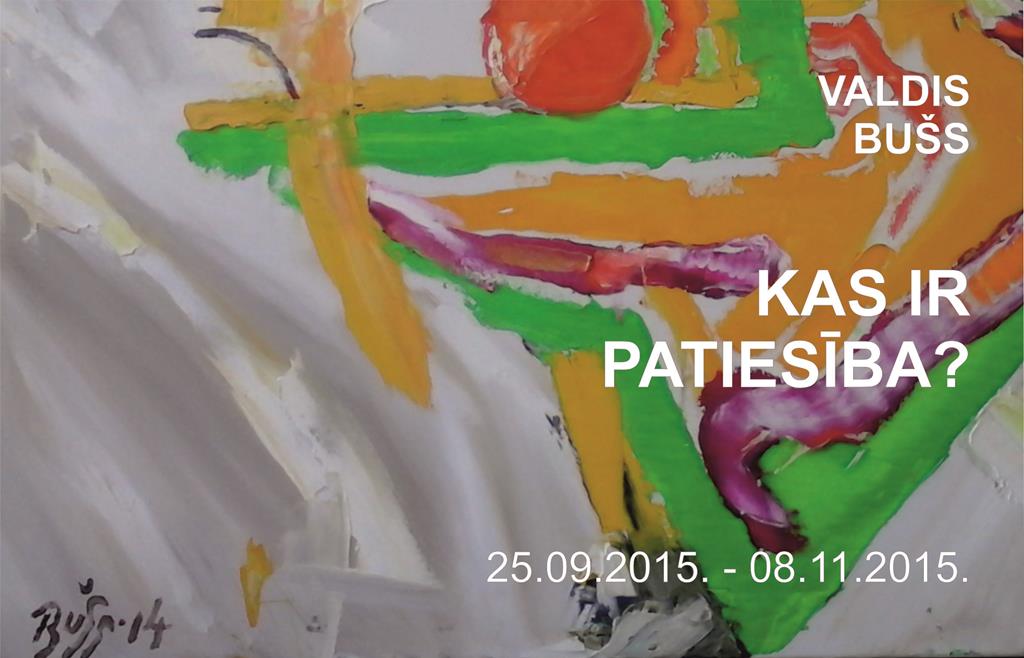 Valdis Bušs
What is the Truth?

Through making logical judgments an individual can predict the consequences of one’s own and other people’s actions, building different models of thoughts which depict the real world in the past, present and future. Man always thinks in the language he knows best of all! Is the artist’s language art? What is art?
It seems that the question about what art is has never worried the outstanding landscapist from Latgale, Valdis Bušs, since through the language of his painting as well as through the huge number of his works he has said so much about the past and the present and has aspired towards the realization of the dreams about the future, allowing us to enjoy “struggle”, “power”, “mission” and “idea”, “light”, “game”, “flame” and innumerable “green suns”. Why green, why compositions so greatly contrasting in color?
Is the sun green, or the sky yellow, or the grass white, is the horizon red? And who can assert that they are not? What is the truth?
Valdis Bušs has passionately loved everything he wished to depict. We see it from the presence of the planned color in his works, from his deep love for nature, which through an original and expressive wave of strokes of the brush is depicted in its most powerful mood. Since the very beginning of his life and artistic activities, we can only admire his purposefulness, strong character, even sharpness, spitefulness and stamina when it was needed.
“Being a “čangals” [a native from Latgale], I am strong” Valdis Bušs used to say, recalling his native local community of Viļaka. “Since my very youth I needed strength and stamina. In 1943 I was enlisted in the legion, participated in battles as a commanding officer, was wounded and then demobilized. In August, 1944, I was called up for the service in the Red Army, was wounded in Kurzeme, and in March of 1945 was demobilized. The “čangals” endured it all and entered Art Academy to study with Leo Svemps and Ārija Skride. Four years of studies in the Academy are a valuable professional school, but …”
The strokes of artist’s brush evoke a feeling that the painter “is playing” with the theme he has selected; however, usually behind a seemingly abstract painting a concrete landscape, flowers, some event or simply artist’s sensations are hidden.
Dace Lamberga describes Bušs’s art as follows: “Among his predecessors, Bušs considers Henri Matisse and Jānis Tīdemanis as his own, but it seems that the amplitude of our “Frenchman” Rūdolfs Pinnis might have visually influenced him either. At least, the strict, expressive colorfulness and the broad touches of the palette knife upon the surface of canvases by all means allow us anticipating this. It is the freedom of easy strokes of the brush and texture that fascinates everybody in Valdis Bušs’ pictures, and this freedom reveals amazingly just in the expressive laconism and combinations of color in small-size compositions”.
“The Sun – it is the Light, the God, the enormous strength that unites us. Of course, I introduce it also because of the color; however, the main thing is the philosophical need for the sun. But to paint the sun is not so easy at all. It can be done only relatively – to create an idea about the essence of the sun, since it is too bright. What is the color of the sun? I feel an inner need to paint it green, but I can’t explain why “, says Valdis Bušs about his painting. Perhaps, this is the answer to the question about what the truth is, because in art everybody has its own truth.
The artist was born on July 25, 1924, in Latgale. He received art education in the Art Academy of Latvia (1945 – 1950). His works are known in Latvia, in many European countries and other continents – his exhibitions have been held in America, Australia and even in Africa. The painter has participated and popularized Latvian art by participating in more than 120 local and international exhibitions, and has organized more than 40 solo exhibitions.