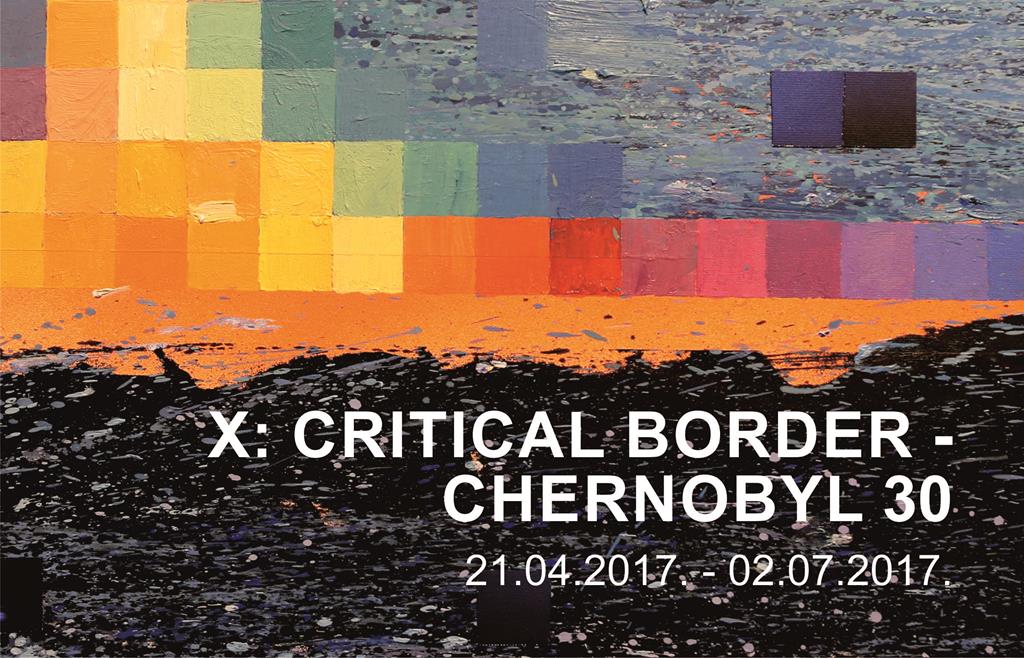 AND THAT WILL BE FOR EVER…

The thematic exhibition ‘ X: CRITICAL BORDER ’ is more than just about the Chernobyl nucleus disaster or the visit of Svetlana Alexievich, winner of the Nobel Prize in literature. The originator of the exhibition, Albinas Vološkevičius, addressed artists of Panevėžys inviting them to delve deeper into the theme by working in pairs on a joint art works.

It is far from a simple task, in the world of art in particular. It is because each artist strives for their personal autonomy.  Artists are prepared to defend their exceptionality, personal individuality, and uniqueness of their artistic style at any costs. It is a prerequisite to the artistic and economic value of an artist’s work.  In addition, it is also because the style of a work is traditionally linked to the artist’s singularity of thinking, his individual world outlook, and personal mythology.

Despite the early avant-garde and post-modernistic prophesies of the ‘death of an author’ which questioned the notion of authorship itself, the above attitude towards the value of a personal style continues to remain dominant in the world of art. Thus, the invitation issued by Albinas Vološkevičius could have been met by some artists as simply an insult, found scary or amusing by others, while there might be still others who would recognize certain new possibilities offered by such an invitation.

And if they are tried to be persuaded a bit more insistently (as it was done by Albinas), if the significance of the necessity for such collaboration  is revealed before their eyes, when an enticing purpose is indicated and certain adventure promised, then there will certainly appear some like-minded creators who will sacrifice their own perfected style and interlace it with the artistic expression of another artist for the sake of creating something new out of those two ways of depicting that, though not belonging to any of those two artists individually, is found vividly intriguing by its unexpectedness not only by the artists themselves but also by the spectators familiar with their individual styles.

Similarly, as we get attracted to a new truth being born in a discussion between two people, we may equally be interested in a creative result based on a principle of equivalent dialogue. Hence, it is very interesting to observe the artistic consequences of this challenging project. On the one hand, it is extremely intimate, as the artists are simply engaged in a creative ‘intercourse’ on the plane of one artistic creation. On the other, you are able to see what otherwise might never have happened without this project. While the styles of individual artists are so familiar and predictable, their synthesis may turn into a creative happening and prove to be completely unpredictable. The third aspect is in a possibility to trace the course of the artists’ creative dialogue, to experience the history of their mutual interrelations, tensions, agreements and dissensions in a work of visual art.

This critical limit is repeated twice in this project: as the Chernobyl disaster that opened a new stage in human history, and as a critical encounter of artists with the problem of authorship, style, and collaboration. I believe that the theme of the project and the invitation for artistic collaboration meaningfully complement each other.

First of all, when referring to the Chernobyl theme, which is at the same time both global and very personal, this atmosphere of discussion, exploration, and empathy proves to be very helpful. An apocalyptic theme like this is not subject to any rational reasoning or to historic or scientific explanation. It is, rather, a state of silent post-traumatic experience, a poisoned existential self-observation. Thus, talking about her book on the Chernobyl disaster, Svetlana Alexievich highlighted that its text was not about Chernobyl; it is rather about the world of Chernobyl, which we know so little about. She sees it as a missed period in history. Thus, she is not interested in the accident itself, like what happened that night at the power station or whose fault it was, what decisions were taken, how many tonnes of sand and concrete were used to built the sarcophagus above that hell hole; she focuses on the perceptions and feelings of those people who were faced with the unknown. With mystery. That is why Chernobyl is an enigma which we will still have to resolve. Perhaps, in the 21st century. It is a challenge it has to face. What was man able to learn there, to guess, or to discover within his own self? How did he look at that world? According to the writer, it is a reconstruction of feelings, not an account of the event.

It is namely such a reconstruction of the event that the participants of the project ‘X: Critical Limit’ embarked upon. In their conceptions, they take a very personal journey to the time of the disaster in their memories. They explore the scope of the disaster, its symbolism; they arrange their experiences, emotions, thoughts and visions in the joint composition of the work. This is particularly vivid in the joint painting ‘Empty Home’ by artists Ramūnas Grikevičius and Rūta Povilaitytė. The existential monochrome of earthly tones in the coldness of a bare interior seamlessly spread over the ‘zones’ of both painters and join into an emotionally strong and consistent composition. This work particularly closely echoes both the experiences of those lonely hermits who have stayed behind in the deadly zone of Chernobyl and their confused babble recorded by Svetlana Alexievich in her book ‘The Chernobyl Prayer’.

Extremely impressive by its collaborative result is ‘With Smoke to the Mirrors of Souls’ – a collage of Stasys Povilaitis’ photos and Raimondas Gailiūnas’ painting: the organic, elemental, poisonously red composition of horses’ eyes and gas masks strongly affects the viewer by its expressively garish artistic manner, drastic colours, and the blackness of the hollow eyes of the ‘nature’.

A hazardous gamut of the colours of a radioactive nuclear disaster radiates from the joint work ‘The Glow’ by Sigitas Laurinavičius and Valentinas Pečininas created by resorting to the synthesis of photographic images and painting. A more romantic impression is produced by the work of the Saulius Saladūnas and Osvaldas Juška duo. The levitating coloured figures of angels rotate in the eternal circle of destruction and creation backgrounded by crumbling walls in the photo by Saulius Saladūnas.

An interesting spatial synthesis of painting and photography vibrate from the work by Andrius Repšys and Jūratė Kirtiklytė ‘What I remember from that day…’ A refined black and white drawing of a little plane and a similar monochrome, hauntingly miserable view of a lakeshore seen through the eyes of a flying bird is also interesting, as namely vis-à-vis this work, it dawned upon me that only by working together that two means of expression can be combined in such an effective way, and two seemingly separate, though mutually complementing each other, planes of painting and photography can be composed together.

Those duos have visibly demonstrated that it is certainly worth engaging in risky adventures of collaboration even at the expense of the consistency of one’s own refined style. Only like this, in a critical intersection of two artistic visions, a third meaning is born – and only in the presence of good will, trust and determination.

Obviously, it is also possible to have a traditional, ‘non-paired’ interpretation of this consequential technogenic catastrophe. Thus, even when working separately, Girmantas Rudokas, Mindaugas Breiva, Tomas Rudokas, Eugenijus Marcinkevičius Diana Rudokienė, and Raimondas Gailiūnas were able to find interesting and unexpected expressions of this theme. Why? When a curator suggests a relevant and concrete theme, when an exhibition is purposefully linked to an event, an artist is no longer completely free. He is drawn into a dialogue and a discussion; he is forced to transform, to revise his stylistic possibilities. Such creation in a guided project is also some kind of a duo. However, in that case, it is not a collaboration of artists but a cooperation between an artist and the curator. Such interaction may also be beneficial for a renewal of one’s style.

For instance, in her dramatically impressive painting, Diana Rudokienė depicts the sea swept over by radioactive solar winds. Wading in that water, the artist arrests her spectator with a silently questioning glance. She is not flirting; it is rather an invitation for a dialogue, for questions without answers. One more work for this project was additionally offered by Raimondas Gailiūnas, who presents an ecologically engaged and comprehensive story – a triptych – about suicidal passions of virtual reality enthusiasts. A sophisticated embroidered abstraction has been presented for the project by Girmantas Rudokas; a minimalistic expression of well thought-out ideas is typical to the painting by Tomas Rudokas. A cinematographic suspense of a horror story is masterfully created by Mindaugas Breiva: by combining an intricate drawing and a free painterly brushstroke, pungent colours and white pauses, the artists draws us into a strange story where scary misgivings prevail over a clear ending. A somehow less thematically engaged is the painting by Eugenijus Marcinkevičius, though offering more freedom to spectators for their own interpretations. And it should never be forgotten that one of the principal co-authors of artistic works are also spectators themselves.

This project ‘X: Critical Limit’ is meaningful as a collaboration initiative of artistic people of the town, as a guided expression of a relevant and consistent theme, as a tangible prerequisite for till other creative initiatives in the future.

There is no doubt that an active involvement of artists in contemplating the paradoxes of the contemporary world is of great necessity. Especially so, as Svetlana Alexievich herself argues that it is not possible to say that we live in post-Chernobyl times. We live in the times of Chernobyl, and that will be for ever.