Fifth anniversary of the Rothko Centre 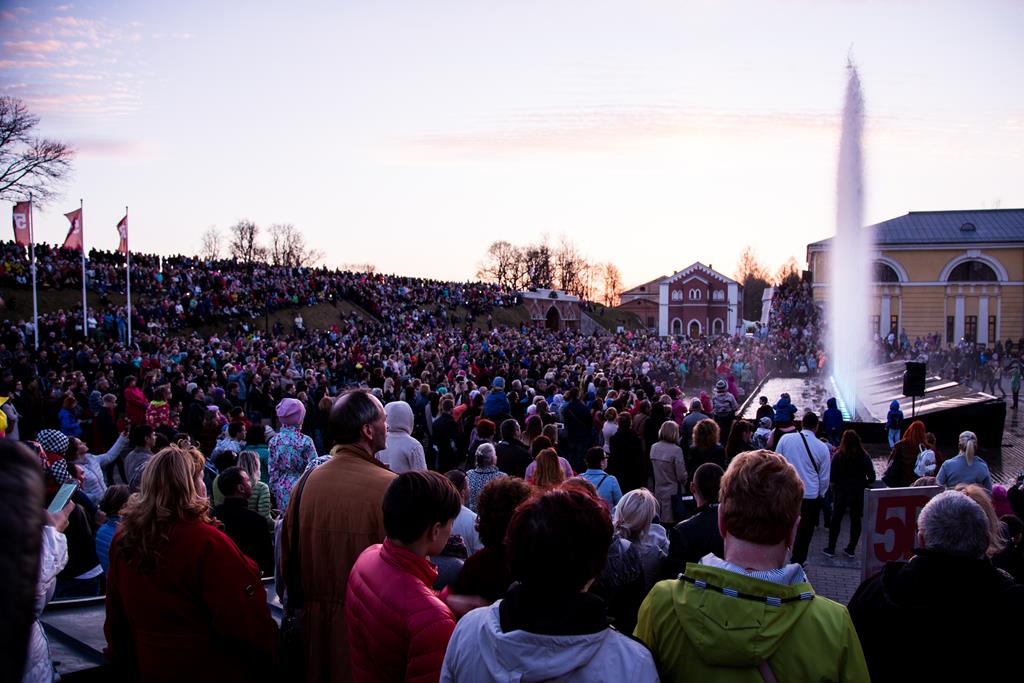 On 24 April, five years will have passed since Daugavpils Mark Rothko Art Centre opened its doors to the public as one of the most ambitious 21st-century cultural projects in Eastern Europe.

Prior to the opening of the Rothko Centre on 24 April 2013, a long journey had been made to bring to fruition the idea born in the distant 2002 and create a unique tribute to the Daugavpils-born world-renowned artist Mark Rothko – a place that offers an opportunity to see Rothko’s originals worth millions of dollars. Before that, the fact that the world-renowned 20th-century American artist Mark Rothko (Marcus Rothkowitz) was born in the Russian Empire town of Dvinsk (present-day Daugavpils in the Republic of Latvia) was little discussed in international circles.

Daugavpils Mark Rothko Art Centre is located in the historical artillery arsenal building of Daugavpils Fortress, originally built in 1833. Reconstruction of the arsenal as suitable location for the Rothko Centre took the joint effort of three different projects, which were co-funded by the European Union. The projects were implemented by Daugavpils City Council in cooperation with the Ministry of Culture of the Republic of Latvia, the Rothko family and supporters from all across the globe. In total, creation costs for Daugavpils Mark Rothko Art Centre amounted to nearly six and a half million euros. Most of the money came from European Regional Development Fund, but the project would have been impossible without co-funding from Daugavpils City Council and special purpose grants from the state budget. The annual budget of Daugavpils Mark Rothko Art Centre is comprised of funds allocated by Daugavpils City Council, project funding from State Cultural Capital Foundation and the centre’s earnings from admission fees and other charged services.

Daugavpils Mark Rothko Art Centre was conceived with a view to promoting cultural tourism to and within Latvia. Key among the centre’s objectives is shaping the international image of Latvia and Daugavpils and contributing to its cultural competitiveness, facilitating creation of exceptional cultural products and development of culture as a public service. The centre works towards integrating the cultural processes of Daugavpils into European and global trends and offering locals as well as domestic and international tourists access to high-quality expressions of professional art.

Along with a permanent display “Mark Rothko. Life and Art” featuring six valuable originals by Mark Rothko, the centre offers both permanent and temporary shows across over two thousand square metres of exhibition space. Five exhibition seasons are launched each year. Each season offers the public a chance to see and assess seven new shows. The Rothko Centre is a place that discovers new stars as well as showcases originals by artists whose names have long been written into the pages of art history books. The centre has exhibited artwork by Mark Rothko, Salvador Dali, Pablo Picasso, Edvard Munch, Sigurds Vīdzirkste and other world-renowned artists. Since 2013, 209 group and personal exhibitions of different magnitude have been held at the Rothko Centre, featuring artwork in different media – painting, graphic art, textile art, ceramics, photography etc., and highlighting some of the best artistic projects by regional, domestic and international artists. 28 exhibitions have been organised in other art spaces in Daugavpils, Rīga, Cēsis, Bauska, Kuldīga, Lūznava and Rēzekne. A number of exhibitions from the Rothko Centre’s collection have travelled outside Latvia to countries such as Lithuania, Estonia and Belarus.

In addition to organising exhibitions, Daugavpils Mark Rothko Art Centre publishes 10 to 20 new art catalogues each year. Since 2013, 54 art catalogues have been issued, and all of them are available at the Rothko Centre’s extensive library. A sizeable body of publications at the library covers Mark Rothko’s biography and creative work. Moreover, the library also holds a vast and diverse collection of writings about different artistic genres as well as portfolios of the many participants of the centre’s international symposia.

Within the framework of its artist-in-residency programmes, Daugavpils Mark Rothko Art Centre organises five international symposia per year in different artistic disciplines. In the course of five years, 25 symposia have been held featuring 269 artists from different countries. Each year, artists from up to 20 countries come to the Rothko Centre’s symposia, including guests from neighbouring states and Europe, but just as often the centre’s symposia welcome participants from Australia, Brazil, Egypt, India, Mexico, New Zealand, South Korea, the USA and other faraway, exotic lands.

Besides exhibitions and symposia, Daugavpils Mark Rothko Art Centre organises a number of other events and activities. Among the most popular is the annual Museum Night. A record number of Museum Night visitors (6,787) to the Rothko Centre was observed in 2017. Another tradition, which began in 2015 and grows ever more popular, is the Art Night, which is celebrated annually as part of Daugavpils City Festival. It is an interactive, dynamic and bold night-time artistic event at Daugavpils Fortress, which invites to engage with art through conversation, contemplation, creation, walking and storytelling

Daily life at the Rothko Centre would be inconceivable without creative workshops, lectures and master classes given by different artists. Meetings with artists take place on a regular basis and contribute to ongoing accessibility of artistic processes to target groups of different ages and interests. Overall, in the course of five years, up to 200 events of this kind have been held at the Rothko Centre in addition to educational programmes for children and youth, which are available at any time upon prior application.

Many musicians, music and theatre producers and authors of other kinds of projects choose the Rothko Centre as a venue for their events. Thus, five to ten concerts are organised here each year. Over the course of five years, the most visited was the March 2018 performance by Ian Maksin – a cello virtuoso who currently resides in the U.S. He attracted over 200 guests, followed by a joint concert programme by Rīga Saxophone Quartet and French saxophone player Jean-Pierre Baraglioli in 2017 and a 2016 performance by Haskell Small – famed U.S. pianist, author of the Rothko theme.

Ever since its foundation in 2013, Daugavpils Mark Rothko Art Centre annually adds to its collection with valuable donations – artwork, catalogues, publications, video recordings and books. Overall, the collection currently holds 3,166 pieces, which are regularly exhibited in different shows. In 2013, the centre received a truly exceptional donation – the personal collection of ceramics and graphic sketches by Pēteris Martinsons. To honour the invaluable contribution to ceramic art by the Daugavpils-born artist, it was decided to begin work on the Martinsons Memorial House where the artist’s creations will be showcased to the public in a permanent display. Opening of Martinsons Memorial House is scheduled for 2019.

The name of Pēteris Martinsons lives in another landmark event for contemporary ceramics in the Baltic Region, organised by Daugavpils Mark Rothko Art Centre in cooperation with Latvian Centre for Contemporary Ceramics. It is the international ceramics biennale with an international juried exhibition “Martinsons Award”. The tradition began in 2016 and will continue in 2018. As of now, 395 applications have been received from 53 different countries.

Traditional and new events make people flock to the Rothko Centre, which receives over 90,000 visitors each year. Overall, since 2013 Daugavpils Mark Rothko Art Centre has had over 500,000 visitors.

Five years of intensive work have enabled the Rothko Centre to prove that it can provide finest quality cultural and tourist services, thereby contributing to domestic and international recognition of Daugavpils and Latvia, boosting local economy, revitalising the urban area of Daugavpils Fortress and raising the self-esteem of local population. The centre’s success story is confirmed in a series of awards and prizes received over the course of the last five years, such as Latvian Building of the Year 2012 Award in the nomination “Restoration”, Latvian Tourism Development Agency Award to the “Most Successful Tourist Attraction 2013”, annual award “Kilogram of Culture” 2013 and Annual Cultural Award of Newspaper “Diena” to a “Remarkable Top-Level Cultural Fact 2013”, Daugavpils City Council Award to the “Most Popular Tourist Attraction in Daugavpils 2014”, distinction by LONELY PLANET which listed Daugavpils Mark Rothko Art Centre as one of the “10 Reasons to Travel to Latvia”, Latgale Tourism Conference Award to the “Best New Tourist Attraction 2015”, Daugavpils City Council and Daugavpils Municipal Agency for Tourism Development and Information Award to “Tourist Attraction of the Year 2016”.

The fifth anniversary of Daugavpils Mark Rothko Art Centre is the first significant milestone that justifies taking a pause, looking back, assessing present achievements, setting new goals and moving steadfastly towards their fulfilment.