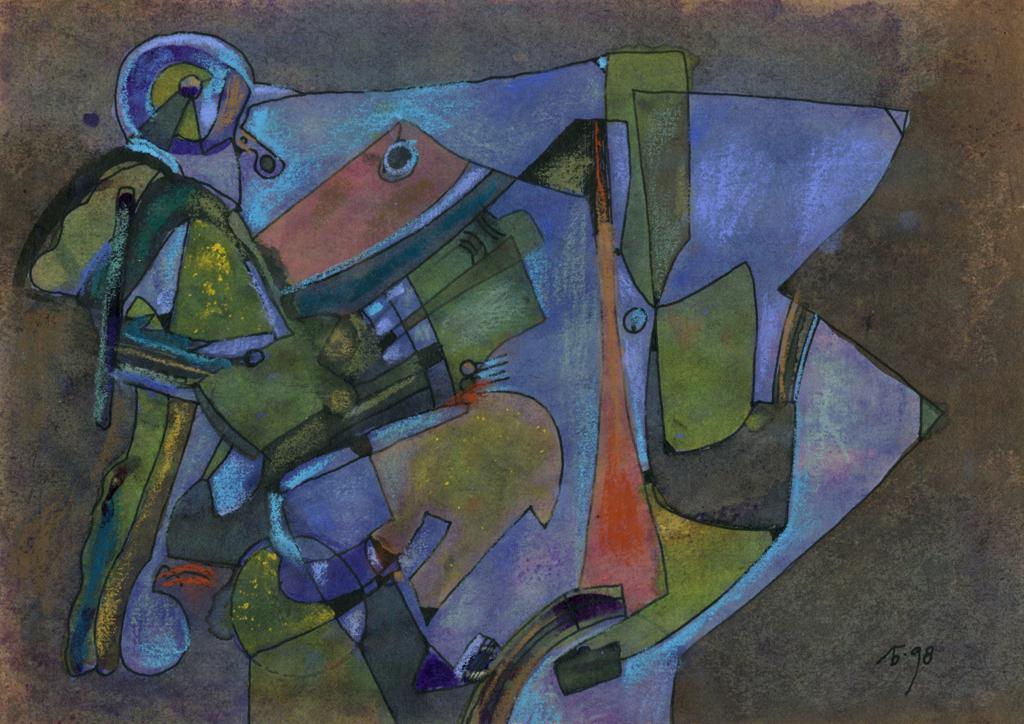 The exhibition “Russian painting from LNMA collection. End of the 19th – 1st half of the 20th century.” is the first project of collaboration between Daugavpils Mark Rothko Art Centre and Latvian National Museum of Art. In the exhibition there will be seen the pearls of painting created by such artists as Gr. Bobrovsky, N. Bogdanov – Belsky, A. Gaush, I. Levitan, N.Roerich, S.Vinogradov, etc. Such wide-scale exhibition of Russian painting from the end of the 19th till the 1st half of the 20th century will be exhibited in the cultural space of Daugavpils for the first time.

The artist Ilgvars Zalans (born in 1962) is a prominent world citizen in contemporary Latvian art.  Now he lives and paints in Indonesia. The painter has actively used the opportunities of art residences and thus he has travelled nearly half of the world.  In recent years, his art was known more in Malaysia, China, Japan and Korea than in Latvian as he did not stay much in his native county.

Alexander Roloff – German artist born in Liepāja. He received his education from the Graphic Art and Painting division of the Bochum University of Applied Sciences (Germany).

In the exhibition “Time Witnesses” the artist offers his study of several topics which are particularly important for him, creating both constructive and abstract works as well as collages. The philosophy of time is topically conjunctive in this exhibition.

Peteris Martinsons (1931 – 2013) is the best known Latvian ceramist in the world. During his creative work which lasted more than half a century, his art and personality had suggested and inspired the ceramists of different generations from both Latvia and abroad, his artistic excellence was regularly demonstrated by the achievements in international competitions, the radiation of his personality helped his colleagues at workshops and symposia, students, workshop participants and the people he simply met on his way to charge with creativity.

In 2013, Peteris Martinsons donated a collection of his creative life’s work to Daugavpils Mark Rothko Art Centre. The exhibition “Peteris Martinsons. CERAMICS. 1963 – 2013” consists of works from this collection- most characteristic works of different periods, supplemented with the author’s thoughts about life, art and values.

The exhibition “Variations” displays drawings, sketches and watercolours of Leonids Baulins, which, probably, were not widely known for the viewers before, though these works comprehensively introduce them to the nature of the artist improvisator and experimenter, where like in music the artist creates multiple variations of different themes until he reaches the end of completed, fully-developed artwork.

CITY- SPACE – ART is the exhibition of plain air with the same title. The plain air has taken place in the German city Gorlitz in 2013, where 14 artists from different countries gathered to study the spatial experience of architectural, historical, social, and spiritual landscapes. If we look deeper, we see that the artists allow us to go through the process of education and cultural absorption, because the works created during the plain air “CITY- SPACE – ART, through the  diversity of their representation show  an exhilarating depiction with almost inexhaustible possibilities to discover and experience the  cultural and historical heritage of the Gorlitz city.

The exhibition of art schools graduates’ works of the Latgale region as a point of reference shows the performance and contribution of Latgale Art schools to this county and region, as well as the possibility for others to evaluate and look at the authors’ first major independent work in the beginning of their  artistic career.